The lesson in Trump catching Covid: all the lies in the world can’t hold reality at bay

If the past few days in US politics were a dramatisation, one would think the plot was too unbelievable. A cast of characters meets to dishonour the last wish of a supreme court judge not to nominate her successor until after the presidential election. Mere days after her passing, they gather in the White House 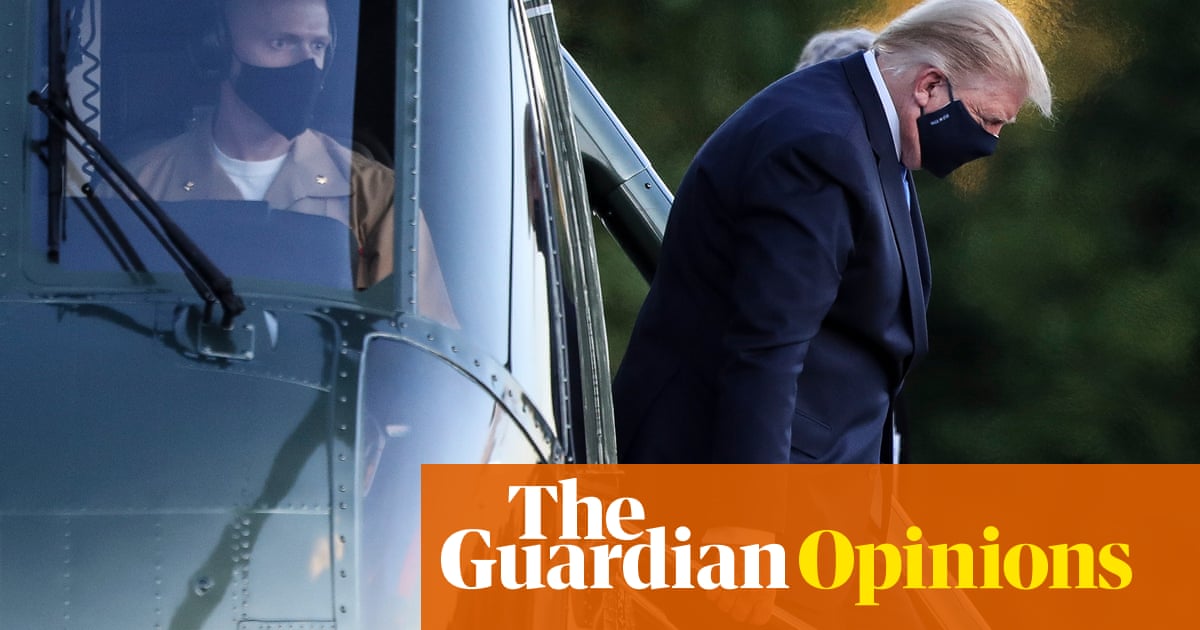 If the past few days in US politics were a dramatisation, one would think the plot was too unbelievable. A cast of characters meets to dishonour the last wish of a supreme court judge not to nominate her successor until after the presidential election. Mere days after her passing, they gather in the White House Rose Garden. They chat intimately, leaning into each other’s space to whisper. Others embrace and kiss in fond greeting. It all had the feel not of a political event but a ceremony of pure triumphalism.

Members of Donald Trump’s inner circle glided through the party to honour his supreme court nominee, Amy Coney Barrett, with the ease and good cheer of a clique free of the restraints of public accountability or moral qualms. Ruth Bader Ginsburg was dead. They were going to force through their nominee. And the pandemic that ravaged the country beyond the pleasant vibes of the Rose Garden was not their concern.

But the plot had a twist. Since that day, President Trump and at least seven others at the event have tested positive for coronavirus. Trump and one other, Chris Christie, are in hospital. Other White House staff close to Donald Trump continue to report positive tests. The pandemic, for so long minimised and trivialised by Trump, had finally reached the most powerful man in the world.

We are not accustomed to Trump receiving any censure for his actions. His presidency so far has been a study in indifference – on the part of the Republican party and his wider supporters across the nation – towards any of his actions, no matter how immoral, dishonest, incompetent or even illegal. But there was something almost biblical about the hubris of that Rose Garden event – the pharaoh who believed he was a god flaunted his impunity, and was punished by pestilence.

None of this is supernatural comeuppance. It just makes cold, rational sense. There is a reason that Boris Johnson succumbed to coronavirus just a few days after boasting of shaking hands with “everybody” during a hospital visit. There is a logic behind Trump’s infection days after attending an event that disregarded all safety rules. The laws of nature have not been suspended. Reality still exists, and it is catching up fast with Donald Trump.

There is much that the president and his party are capable of when it comes to twisting the truth, but his wan and fatigued face as he made a video appearance from hospital was a testament to his limits.

He will still continue to test those limits. This will not be a teachable moment for Trump or his party. There will be no humility, sobriety or indeed class on display. No respect for a nation that has suffered hundreds of thousands of deaths under a leader who mocked and berated those who wore masks – the latest being his presidential rival during last Tuesday’s televised debate.

Just four weeks before an election – one that necessitates careful communication and tight coordination between the White House and Trump’s medical staff – the administration has gone down the route of authoritarian regimes, staging footage of the president signing blank sheets of paper to give the impression he continues to work.

Trump himself, even in his breathlessness, grandstands about how it was his decision to leave the White House and come to hospital because that’s what a great leader does. “I can’t be locked up in a room upstairs and be totally safe,” he says.

This should be a wake-up call for this administration: a chance to plot a corrective path in tackling the virus. There is no chance of that happening. If Trump emerges from the sickness, he and his supporters will press his recovery into the service of yet more propaganda about his strength and resilience. Or he will use his comeback as ammunition to prove that the coronavirus is indeed an exaggerated threat.

He will find a way to weaponise his brush with the virus against Joe Biden – who, he will claim, is a fragile man who doesn’t know how Americans feel because he remained cloistered away, safe from the virus, hiding behind his mask. Trump’s illness, contracted as a result of his carelessness and arrogance, will be recast as evidence of his being a man of the people – who mingled with his public so much that he also fell to the virus.

If Trump’s condition worsens, on the other hand, expect a season of conspiracy theories, and a potential crisis of democracy. This is not an administration that can manage well in times of stability, let alone crisis. For a party whose president had already threatened not to leave the White House in the event of an electoral defeat, more suspensions of the norm will be attempted: the stakes are too high and the time before polling day too short to waste a single breath on humility.

Instead of a reckoning with the epic US death toll, and the fact that the president himself has been compromised by a calamitously poor response to the pandemic, the ugliest brawl is now on the cards. The party will scramble over the bodies of the dead to secure its interests, as it did over Ginsburg.

Whatever short-term gains the cynical exploitation of Trump’s illness will deliver to him and his party, the past few days are a reminder that there are some things beyond their reach. There are some crimes they can’t outrun. Donald Trump’s profound failures in leadership, and the Republicans’ complicity in those failures, will claim them eventually. Despite all the lies, reality will ultimately win through.

• Nesrine Malik is a Guardian columnist and the author of We Need New Stories: Challenging the Toxic Myths Behind Our Age of Discontent