It sounds like a sci-fi movie, or the weirdest series of Big Brother ever. Eight volunteers wearing snazzy red jumpsuits seal themselves into a hi-tech glasshouse that’s meant to perfectly replicate Earth’s ecosystems. They end up starving, gasping for air and at each other’s throats – while the world’s media looks on. But the Biosphere

It sounds like a sci-fi movie, or the weirdest series of Big Brother ever. Eight volunteers wearing snazzy red jumpsuits seal themselves into a hi-tech glasshouse that’s meant to perfectly replicate Earth’s ecosystems. They end up starving, gasping for air and at each other’s throats – while the world’s media looks on.

But the Biosphere 2 experiment really did happen. Running from 1991 to 1993, it is remembered as a failure, if it is remembered at all – a hubristic, pseudo-scientific experiment that was never going to accomplish its mission. However, as the new documentary Spaceship Earth shows, the escapade is a cautionary tale, now that the outside world – Biosphere 1, if you prefer – is itself coming to resemble an apocalyptic sci-fi world. Looking back, it’s amazing that Biosphere 2 even happened at all, not least because the people behind it started out as a hippy theatre group.

“Just the fact that the same number of people came out as went in is a triumph,” says Mark Nelson, one of the original eight “biospherians”. Far from a failure, he regards Biosphere 2 as an unsung achievement in human exploration, as do many others. “I like to say we built it not because we had the answers. We built it to find out what we didn’t know.” 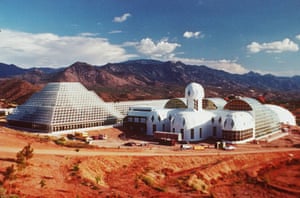 Biosphere 2’s origins lie in late-1960s San Francisco, and a man named John P Allen. Already in his 40s by then, Allen was something of a renaissance man: a Harvard graduate, a metallurgist, a union organiser, a beat poet, and a traveller studying indigenous cultures. He founded an idealistic performance group called the Theatre of All Possibilities. As the name suggests, they wanted to change the world but weren’t sure where to start. Art? Business? Ecology? Technology? In classic counterculture fashion, they decided: “Let’s do all of it!”

They didn’t actually know how to do any of it, save for staging somewhat freeform performances, but “learn by doing” was Allen’s philosophy – and it took them surprisingly far. In 1969, Allen’s troupe relocated to New Mexico and founded Synergia Ranch, named after the great architect Richard Buckminster Fuller’s concept of synergy, where the whole is greater than the sum of its parts.

“He was a ball of energy,” says Nelson, who joined Allen’s troupe around that time, when he was 22. “He had a great feel for both ecology and theatre. And frankly, he was a very charismatic guy. We’d accomplish one thing, then say, ‘What’s the new challenge?’ He was forever upping the ante.”

They turned their desert ranch into a self-sufficient homestead, planting trees and raising buildings, including a Buckminster Fuller geodesic dome. They founded an art gallery in London (it is still running) and bought another ranch in Australia. In 1975, they even decided to build a ship. Their chief designer was a 19-year-old student with no experience of boatbuilding, but it proved perfectly seaworthy. They sailed around the world for several years, researching the Earth’s ecosystems.

Having learned how these worked, they were ready to build their own. If humankind was going to settle other planets, they reasoned, it would need to learn how to replicate Earth. For a generation that came of age with the moon landings and such films as 2001: A Space Odyssey and Silent Running, this was not a particularly far-fetched notion. Helpfully, Allen and co had a benefactor: Ed Bass, an oil billionaire from Texas, whose own journey of self-discovery had brought him into Allen’s orbit.

Watch a trailer for Spaceship Earth

The Biosphere 2 launch was staged like a space mission. The media descended on the $150m Arizona facility, all gleaming white panels and ziggurats of glass, filled with forests, deserts, laboratories, recycling systems, pigs, chickens, hummingbirds, bush babies, and even a coral reef. There were speeches and fireworks as the jumpsuited volunteers (four women, four men, all white) sealed themselves in for the two-year journey into the unknown.

After a stable start, problems began to emerge. Food, for one. “We really could have used more calories,” says Linda Leigh, another biospherian. Leigh had been involved with stocking Biosphere 2 with wild plants, but many of the food crops were too slow or too labour-intensive to be worthwhile. The wild coffee bushes took a fortnight to produce enough for one cup.

Rather than luxuriating in a Garden of Eden, the biospherians were like subsistence farmers. There was a lot of beetroot

Rather than luxuriating in a Garden of Eden, the biospherians became more like subsistence farmers. There was a lot of beetroot and sweet potato. “It was a challenge to make exciting meals,” says Leigh. “We’d rotate the cooking duties. Some people created new things like a taco-shaped like a dinosaur. Some people made horrible things like cold potato leaf soup.” Everyone lost a lot of weight.

On top of that, oxygen levels decreased faster than anticipated, with a corresponding build-up of carbon dioxide. Earth’s atmosphere is about 21% oxygen, but inside the biosphere it fell to 14.2 %. “It felt like mountain-climbing,” Nelson recalls. “Some of the crew started getting sleep apnoea. I noticed I couldn’t finish a long sentence without stopping and taking a breath of air. We worked in a kind of slow-motion dance, with no energy wasted. If the oxygen levels had dropped any lower, there could have been serious health issues.” 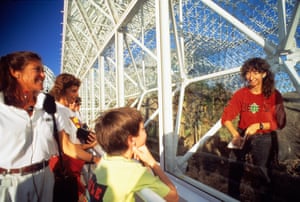 Linda Leigh at work … coachloads of tourists came to see the project. Photograph: Courtesy of NEON

Understandably, morale deteriorated. Living under biosphere conditions was a challenge at the best of times. If the coronavirus lockdown feels restrictive, imagine spending two years with the same seven people and no internet. Nelson likens it to “a marathon group therapy session”. Added to which, true to their theatrical origins, the biospherians were on permanent display. Coachloads of tourists and schoolchildren arrived daily to tap on the glass and take pictures of the emaciated crew. Leigh remembers anthropologist Jane Goodall coming to visit. “She observed us like we were captive primates.”

Cups were thrown and people were spat at, but thankfully there was no violence. “It was more of a coldness,” says Leigh. “Of not wanting to be around each other.” The team split into two camps of four: “Our group was all for bringing in extra food and more oxygen just to keep things going, so our own suffering didn’t impact the work that needed to be done. The other group had other ideas.”

In other words, keep the biosphere closed and retain the purity of the experiment, no matter the cost. A similar debate was going on outside. Biosphere 2’s difficulties had not gone unnoticed, though Allen and the team had tried to conceal them. Eventually extra food was smuggled in and two oxygen pop-ups followed. The biospherians were overjoyed. 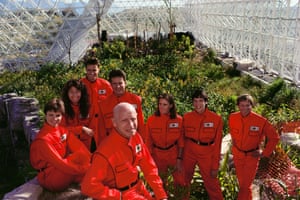 “People starting laughing like crazy and running around,” recalls Nelson. “I felt like I’d been 90 years old and now I was a teenager again. I realised I hadn’t seen anybody running for months.” But on the outside, as debate raged in the media, the project started to be dismissed as non-science, or as one commentator put it, “trendy ecological entertainment”.

Everything you did, you could see the impact of it. My body suddenly got the message: every time you breathe, these plants are waiting for your CO2

Nelson certainly doesn’t see it that way. “Somehow or other, it all got truncated into: ‘This is a survival test for this colony, and the one and only measure of success is whether everything works perfectly, and there’s no necessity to bring in anything from the outside.’ That was never the intention.”

The intention, in fact, was to continue the experiment, learning from their mistakes. A second mission went into the biosphere in March 1994, and looked to be faring better. A month later, though, out of the blue, Ed Bass decided on a mass purge. The purpose was to make the project more businesslike, it seems. Allen and his team were swiftly ejected and a new CEO was literally helicoptered in: Steve Bannon. Yes, that Steve Bannon. Investment banker, future right-wing operator and Donald Trump strategist. As a metaphor for the fate of the planet, it could hardly be more apt.

“I look at it as a story about human ambition, its possibilities and limitations,” says Matt Wolf, director of Spaceship Earth. “I think the experiment revealed that humans are the most unstable element of a closed system.” Like many, Wolf was only dimly aware of the project before he started looking into it. Many of the original biospherians still live together on Synergia Ranch, he discovered, including Nelson and Allen, now in his 90s. Fortunately, they recorded everything: Wolf had access to over 600 hours of 16mm film and video. Biosphere 2 is now managed by the University of Arizona. Linda Leigh runs a community garden project in Oracle, a few miles away. 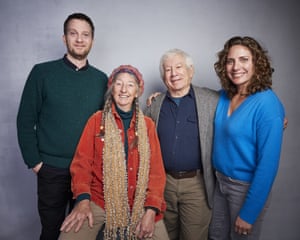 Both Nelson and Leigh would happily volunteer to go back in. Both were transformed by the experience, in a way they wish society as a whole could emulate. “Inside Biosphere 2, everything made sense,” says Nelson. “Everything you did, you could see the impact of it. No anonymous actions. It was like my body suddenly got the message: every time you breathe, these plants are waiting for your CO2. They are your third lung. I thought, ‘My God, this is keeping me alive! I am absolutely metabolically connected to the life here.’”

Even if history does judge Biosphere 2 a failure, is that really so bad? “The media can be very dismissive of people trying new things,” says Wolf. “So much so that people hesitate to try for fear of criticism or failure. If everybody feared failure, they would never try new and ambitious things.”

• Spaceship Earth is available on digital platforms and in cinemas now.