In Some Cities, Police Officers Joined Protesters Marching Against Brutality TOPLINE As protests sparked by George Floyd’s death entered their chaotic fifth day, social media filled with images and video of police officers using batons, tear gas and rubber bullets to quell crowds⁠—but some squads joined in with Saturday protesters to express their stance against police brutality, and to show solidarity with the anti-racism movement.

As protests sparked by George Floyd’s death entered their chaotic fifth day, social media filled with images and video of police officers using batons, tear gas and rubber bullets to quell crowds⁠—but some squads joined in with Saturday protesters to express their stance against police brutality, and to show solidarity with the anti-racism movement. 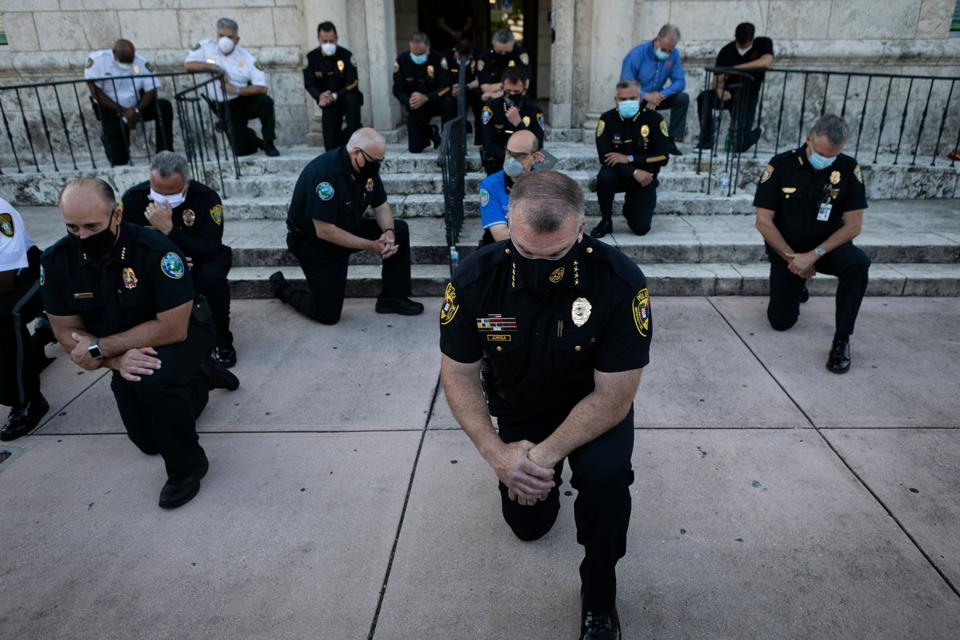 Police officers kneel during a rally in Coral Gables, Florida, on Saturday in response to the death … [+] of George Floyd.

“We want to be with y’all, for real. I took my helmet off, laid the batons down. I want to make this a parade, not a protest,” Genesee County Sheriff Chris Swanson was seen telling protesters in Flint, Michigan, before he joined the assembled crowd to march, eliciting cheers.

Officers in Camden, New Jersey, helped carry a banner reading “Standing in Solidarity,” and seemed to join in with the crowd chanting “no justice, no peace.”

In Santa Cruz, California, Police Chief Andy Mills took a knee with protesters in the pose made famous by Colin Kaepernick, with the department tweeting it was “in memory of George Floyd & bringing attention to police violence against Black people.”

In Fargo, North Dakota, an officer was seen clasping hands with protest organizers while holding up a sign reading “We are one race… The HUMAN race.”

Officers in Ferguson, Missouri, participated in a nine and-a-half minute kneel in Floyd’s memory, with cheers erupting from the crowd.

Despite the moments of solidarity, conflict broke out between protesters and police in Kansas City, Fargo and Ferguson.

Although she didn’t join the crowd, remarks made by Atlanta Police Chief Erika Shields Friday to a black woman protester made the rounds online. “Let me tell you something, I am standing here because what I saw was my people face to face with this crowd and everybody’s thinking ‘how can we use force and diffuse this’ and I’m not having it. I’m not having that,” she said to the protester. “You have a right to be upset, to be scared, and to want to yell. And we’re going to have everybody doing what they need to do and we’re going to do it safely. That’s my first commitment. And I hear you.”

Protests around the world have broken out since the May 25 death of Minneapolis resident and black man George Floyd, which occurred after a white police officer, caught on video, was seen kneeling on Floyd’s neck while arresting him. Three other officers stood by while Floyd could be heard saying “I can’t breathe.” While the four officers have been fired⁠—and the one captured kneeling, Derek Chauvin, was arrested and charged with third-degree murder⁠—a combination of centuries of systemic racism, ongoing outrage at police, the coronavirus outbreak, and mass unemployment have fueled unrest across the country. Over the past five days of protests, police were captured deploying tear gas, flash-bang grenades and rubber bullets on protesters and journalists, along with numerous incidents of physical violence. One woman in Brooklyn, New York, was roughly thrown to the ground, while an NYPD SUV was seen driving through a crowd of protesters.  A Minneapolis photojournalist was permanently blinded in one eye after taking a rubber bullet to the face.