Federal agents accused of behaving like an occupying army were expected to begin pulling out of central Portland, Oregon, on Thursday in an embarrassing climbdown by the White House. But on Wednesday night the forces that have been dubbed by some as “Trump’s troops” made it clear they did not intend to leave quietly. The

Federal agents accused of behaving like an occupying army were expected to begin pulling out of central Portland, Oregon, on Thursday in an embarrassing climbdown by the White House.

But on Wednesday night the forces that have been dubbed by some as “Trump’s troops” made it clear they did not intend to leave quietly.

The Department of Homeland Security paramilitaries guarding the federal courthouse in downtown Portland that has become the focus of protests fired teargas, projectiles and stun grenades into the early hours of Thursday morning against hundreds of demonstrators. 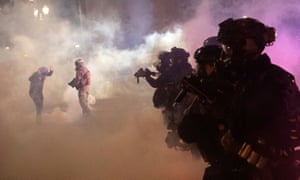 Some protesters turned out to proclaim victory over the paramilitaries sent to the city by the US president.

The federal agents then drove the demonstrators back several blocks in a stronger use of force than other recent nights, and made more arrests.

The announcement by Oregon’s governor, Kate Brown, earlier on Wednesday that she had secured an agreement with the White House for most of the federal forces to withdraw from the courthouse, and for it to be guarded by state police instead, was greeted with a mix of glee and scepticism by the protesters.

Some regarded the move as a humiliating defeat for Trump who sent the federal agents to Portland a month ago, proclaiming they would bring an end to “anarchy” in the city after weeks of Black Lives Matter protests. That has clearly failed.

“I’m still here and they’re leaving. I’d say that whatever it was they came to do, they didn’t do it,” said Amy Tulip, wearing a helmet and gas mask, and holding a “Fuck Trump, Fuck the Feds” sign.

“I’ve been here every night saying the feds have to go because they were sent to terrorise us. So now they’re going, yeah, that’s a victory,” she added. 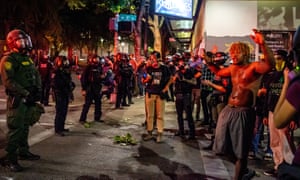 Other demonstrators were sceptical that the federal agents would really leave after the head of US homeland security said they would remain in the area until they were sure the courthouse was protected.

However, Brown said that was no more than an attempt by the White House to save face after what amounted to a defeat for Trump’s attempt to use federal forces for political ends.

She told Oregon public radio “the plan is very, very clear” and that the federal agents “will be out of downtown Portland from Thursday”.

Only US Marshals, who routinely have responsibility for guarding federal buildings, would remain. She said they would not be taking the lead in protecting the courthouse.

“Trump’s troops are leaving the city. That’s a good thing,” said Brown. “I was really clear in my conversations with the Trump administration. I told them that Trump’s troops needed to leave. The federal officers here in the city brought violence and they brought strife to our community. That needed to end.”

Trump tweeted that if the federal government had not sent in the agents then “there would be no Portland – it would be burned and beaten to the ground”.
He also threatened to send them back.

“If the mayor and governor do not stop the Crime and Violence from the Anarchists and Agitators immediately, the Federal Government will go in and do the job that local law enforcement was supposed to do!” the president added.

For all Trump’s bravado and statements from his officials trying to spin the withdrawal agreement as having secured the president’s goal of ensuring the federal courthouse was protected, it amounted to a significant retreat.

Trump originally suggested that federal forces, drawn from the border patrol, immigration service and US Marshals, were sent to Portland to end a weeks-long takeover of a small part of the downtown by supporters of Black Lives Matter. At the time, he implied they would restore order across the city. 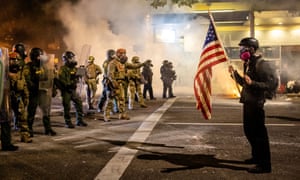 A protester holds up an American flag as federal agents make an attempt to clear a crowd in Portland, Oregon, on Wednesday night. Photograph: Amy Harris/REX/Shutterstock

The DHS agents not only failed to do that but their presence provoked much larger demonstrations, particularly over some of the violent tactics they used and the fear that Trump was using the federal agents to create conflict for political ends. They also prompted a backlash in other parts of the country after agents in camouflage were filmed snatching protesters from the streets in unmarked vans.

“The administration sent in the troops to score points with their political base. It’s really clear that this political strategy has backfired,” said Brown.

It’s not clear if the deployment of the state police will defuse the situation given weeks of conflict between protesters and the Portland city police before the federal agents arrived. But some of the demonstrators on Wednesday night took comfort that state forces are independent of the man in the White House.

“It’s a step in the right direction. At least the state police are not under Trump’s control,” said a demonstrator who gave his name only as Alex. “I was afraid he would send the national guard in and it would be chaos.”

Brown said she told the state police to “use each and every strategy to deescalate” protests and avoid the level of force used by the federal agents. But she said they will protect the courthouse.

“They will use crowd control tactics only as a last resort,” she said.