Undeterred by civil rights lawsuits and pleas from local officials to stand down, federal agents in camouflage have continued their crackdown against demonstrators in Portland, Ore., into the weekend, launching impact explosives and tear gas late Friday at downtown protesters shouting, “Go home.” Since early in the week, agents dispatched by the Trump administration, some 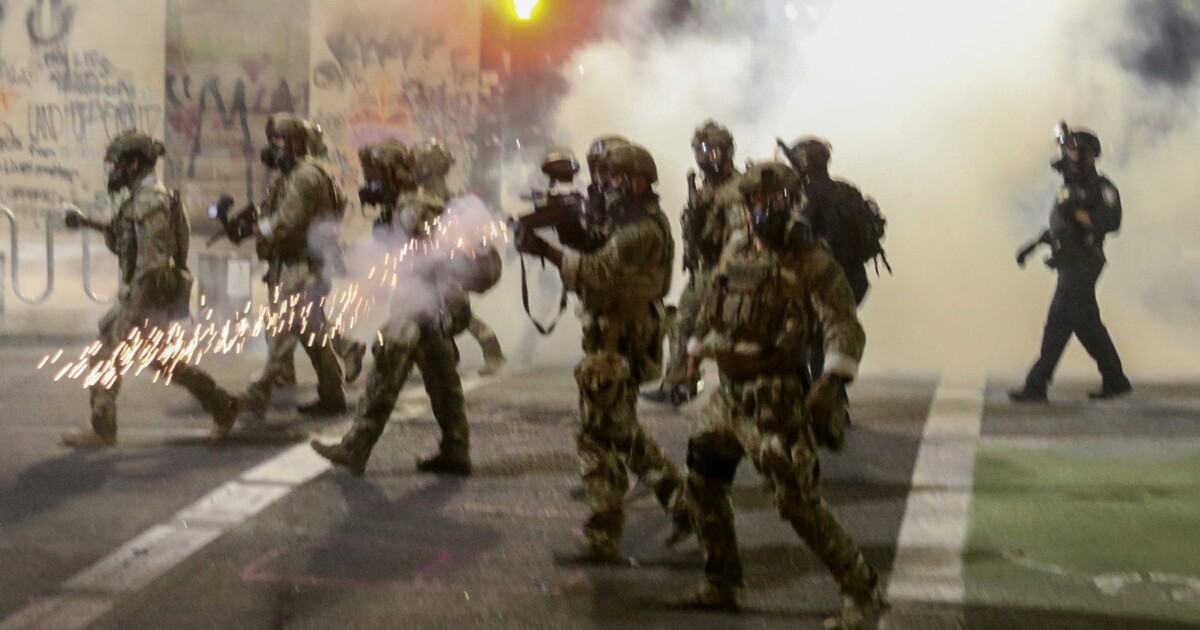 Undeterred by civil rights lawsuits and pleas from local officials to stand down, federal agents in camouflage have continued their crackdown against demonstrators in Portland, Ore., into the weekend, launching impact explosives and tear gas late Friday at downtown protesters shouting, “Go home.”

Since early in the week, agents dispatched by the Trump administration, some in unmarked vehicles, have confronted and detained activists, according to Oregon state officials, charging at least 13 with crimes related to demonstrations. One protester was hospitalized with skull fractures July 11 after a federal agent shot him in the face with a projectile.

By the administration’s move to make Portland an example in a national “law and order” initiative just months before the presidential election, the conduct of federal forces here has accomplished what weeks of strife between protesters and Oregon officials had failed to do — uniting them, at least momentarily, in common cause.

“Every American should be repulsed when they see this happening,” state Atty. Gen. Ellen Rosenblum said in a statement. “If this can happen here in Portland, it can happen anywhere.”

Rosenblum on Friday sought an injunction against federal law enforcement agencies, accusing them of seizing protesters without probable cause, pulling activists into unmarked vehicles and detaining and questioning them without basis for arrests. She said agents in Portland wore no identifying information other than the label “police” on their military fatigues.

“Donald Trump is doing this because it plays well with the right-wing media and his political base,” Sen. Ron Wyden (D-Ore.) said in an interview Friday. “If Trump thinks he can get away with this in the Pacific Northwest, he’s going to try this elsewhere.”

Protests that erupted across the nation after George Floyd was killed in Minneapolis police custody May 25 have quieted in many cities, but not in Portland, where nightly clashes have continued downtown outside two federal buildings and a tower containing police headquarters and a county jail.

“Stay together, stay tight, we do this every night,” protesters chanted Friday as federal agents appeared behind fencing for the nightly face-off.

Protesters say reforms enacted by the city thus far, including modest cuts to the police budget, are insufficient, and they are demanding defunding or abolishing the department.

Portland police have faced off repeatedly with the protesters, including early Saturday when they bull-rushed a crowd, trampling some of the demonstrators. In doing so, they reclaimed an area that the city had partitioned with chain-link fencing, which activists had torn down.

The unrest continued Saturday night, with the Associated Press reporting that protesters broke into the Portland Police Assn. building and set it on fire. Police declared the gathering a riot and began working to clear the downtown area.

Tear gas was deployed, and fencing that had been placed around the federal courthouse had been removed by protesters and made into barricades, the AP reported.

Yet at the same time, political leaders are seeking to have the federal government butt out, concerned that the Trump administration may be using the intervention as a test case for a campaign strategy of confronting peaceful protesters in cities across the country.

Wyden and other Democratic members of Oregon’s congressional delegation called Friday for the inspectors general of the federal Justice Department and Department of Homeland Security to investigate the conduct of federal forces in Portland.

“We demand not only that these acts end, but also that they remove their forces immediately from our state,” said Sen. Jeff Merkley, in a joint statement with Wyden and Reps. Earl Blumenauer and Suzanne Bonamici.

Merkley tweeted Saturday that he and Wyden would add an amendment to the defense bill in the coming week to “stop the Trump administration from sending its paramilitary squads onto America’s streets.”

U.S. Atty. for the District of Oregon Billy Williams, who was reappointed by President Trump in 2017 to a four-year term, has also called for an investigation by the Homeland Security inspector general, saying that in “limited instances” agency officers may have engaged in questionable conduct such as unmarked-vehicle arrests.

He said federal agents had spent the previous 50 nights defending the Mark O. Hatfield U.S. Courthouse and other federal property. Agents had been “met with an onslaught of commercial fireworks, laser strikes, glass, mortars, paint and anything else near at hand,” he said.

Acting Homeland Security Secretary Chad Wolf, who visited Portland on Thursday, has condemned “rampant, long-lasting violence” in the city, alleging violence by “anarchists.” He met with federal law enforcement officials but not Mayor Ted Wheeler, who said he would have turned down a meeting anyway.

“Portland was totally out of control, and they went in, and I guess we have many people right now in jail and we very much quelled it, and if it starts again, we’ll quell it again very easily,” he said during a public appearance at the White House. “It’s not hard to do, if you know what you’re doing.”

In an interview with NPR broadcast Friday, a top Homeland Security official said that federal agents were picking up people suspected of being violent rioters and destroying federal property — and may also do so in other cities in coming days.

“I fully expect that as long as people continue to be violent and to destroy property that we will attempt to identify these folks,” Deputy Homeland Security Secretary Ken Cuccinelli said. “This is a posture we intend to continue not just in Portland but in any of the facilities that we’re responsible for around the country.”

The ACLU of Oregon has sued the Department of Homeland Security and U.S. Marshals Service, two of the agencies deploying agents in Portland, asking a federal judge Friday to add them to an order that he issued in response to a previous suit by the organization, banning local law enforcement agencies from dispersing, arresting or using force against journalists and legal observers at protests. Another court ruling has largely prohibited local police from using tear gas.

“There’s a beautiful national uprising against police brutality, and the response from law enforcement cannot be more brutality,” Vera Eidelman, an ACLU attorney in New York, said Saturday. “Let’s not forget that the president fired tear gas on protesters for a photo opportunity in Washington, D.C., and what’s happening in Portland and around the country is unconstitutional and has to stop.”

On Friday evening, several hundred people held a candlelight vigil outside the downtown jail. City Commissioner Jo Ann Hardesty encouraged them to push for police reforms and decried the federal presence in Portland.

Later about 200 people blocked downtown traffic outside the police headquarters and jail, and some protesters took metal fencing from nearby parks, using it to barricade doors of the building and a federal courthouse next door.

Dozens of federal agents wearing gas masks gathered behind fencing that held back a few hundred protesters and, with no warning, detonated an impact blast and began spreading clouds of tear gas. Many protesters walked away from the billowing gas, but some who remained in range fell to the street, gasping and choking.

One of the protesters, a 28-year-old woman wearing a bicycle helmet and black mask, stood out of range, coughing and wiping a pair of swim goggles. The woman, who declined to give her name for fear of retaliation, said that after protesting nightly for weeks, she had stayed away and then recently resumed demonstrating because of anger at the federal agents.

“We haven’t been more violent than any protesters in other cities, but because we’re a small city we make an easier target,” she said.

Another protester, who gave only her first name, Mars, said she had demonstrated for more than 50 nights, at first to express outrage at Floyd’s death and then at the Portland police department. She said local officials seem to be trying to have it both ways.

“It’s upsetting to watch the same elected officials who authorized violence against us by the Portland Police Bureau condemn similar conduct by federal agents,” she said.

At 1:30 a.m. Saturday, police declared an unlawful assembly and told demonstrators to leave. Officers charged protesters, the police department said, after several threw glass bottles, rocks and broken pieces of metal from fencing. Police made arrests, but did not say how many.

The unrest has transformed Portland’s downtown, where many businesses remain boarded up and covered with graffiti.

Some suburban residents say they avoid the city center and welcome the federal presence.

Diane Gudmundsen, 61, who lives in the western suburb of Hillsboro, said she thought Portland’s mayor and City Council members had allowed widespread damage to businesses already crippled by the COVID-19 pandemic. Gudmundsen, a chiropractor who collects food donations for farmworkers, said that while she opposes Trump’s presidency, something must be done to halt destruction in downtown Portland.

“I think perhaps it’s proper to have some federal intervention,” she said, adding that she believed agents would not target people indiscriminately. “I think they’re looking for certain people they have on their watch lists, certain people who have thrown boards with nails at police or that kind of thing.”