Activists in Portland, Oregon, are expressing severe alarm about recent incidents involving federal law enforcement officers using unmarked cars to detain peaceful protesters. Federal officers deployed teargas and fired less-lethal rounds into a crowd of protesters on Thursday, hours after the the head of the Department of Homeland Security visited the city and called the

Federal officers deployed teargas and fired less-lethal rounds into a crowd of protesters on Thursday, hours after the the head of the Department of Homeland Security visited the city and called the demonstrators “violent anarchists”.

Oregon Public Broadcasting reported that federal law enforcement officers had been “using unmarked vehicles to drive around downtown Portland and detain protesters” since at least 14 July.

“Personal accounts and multiple videos posted online show the officers driving up to people, detaining individuals with no explanation of why they are being arrested, and driving off,” it added.

Anti-racism protests have taken place for nearly two months in Portland, since the police killing of George Floyd in Minneapolis on 25 May.

During a visit to Portland earlier on Thursday, Chad Wolf, the acting homeland security secretary, said state and city authorities were to blame for not putting an end to the protests, angering local officials.

Wolf characterized the protests in a tweet, claiming: “The city of Portland has been under siege for 47 days straight by a violent mob while local political leaders refuse to restore order to protect their city. @DHSgov stands ready to assist to bring this violent activity to an end.”

In captions of pictures posted on Twitter, Wolf praised police dressed in military-style fatigues, and toured property that appeared undamaged apart from graffiti, such as “BLM” and “If not us, who? If not now, when?”

Chad defended the actions of federal law enforcement officers in Portland, saying, “These valiant men and women have defended our institutions of justice against violent anarchists for 48 straight days. We will prevail.”

Portland’s mayor, Ted Wheeler, and other local officials have said they did not ask for help from federal law enforcement and have asked them to leave.

A few hundred people had gathered near the federal courthouse on Thursday night, news outlets reported. Police told protesters to leave after announcing they heard some chanting about burning down the building, according to the Oregonian.

A short time later, federal officers fired rounds and deployed teargas to break up the crowd. Some protesters remained in the area early on Friday and were detained, but it was unclear whether any arrests were made, the newspaper reported.

Ken Cuccinelli, the homeland security acting deputy secretary, said on Friday morning on Fox & Friends that the federal government had a responsibility to protect buildings such as the courthouse. 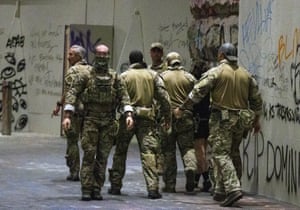 “What we’ve seen around the country is where responsible policing is advanced, violence recedes,” Cuccinelli said. “And Portland hasn’t gotten that memo. Nor have a lot of other cities. And the president is determined to do what we can, within our jurisdiction, to help restore peace to these beleaguered cities.”

However, OPB noted that interviews with protesters showed that “officers are also detaining people on Portland streets who aren’t near federal property, nor is it clear that all of the people being arrested have engaged in criminal activity. [Two demonstrators] said they think they were targeted by federal officers for simply wearing black clothing in the area of the demonstration.”

The news organisation also reported that federal officers “left one demonstrator hospitalized with skull fractures after shooting him in the face with so-called ‘less lethal’ munitions July 11”.

Portland activists have warned the strategy may indicate how the Trump administration plans to crack down on other cities that have seen protests in recent weeks.

“I think Portland is a test case,” Zakir Khan, a spokesman for the Oregon chapter of the Council on American-Islamic Relations, told the Washington Post. “They want to see what they can get away with before launching into other parts of the country.”

Trump said on Wednesday that he would soon issue an announcement about steps the federal government will take to rein in “out of control” cities.

The president said he would make an announcement next week “with the attorney general, the FBI and others concerning our cities, because the leftwing group of people that are running our cities are not doing the job that they’re supposed to be doing, and it’s not a very tough job to do if they knew what they were doing”.

Trump specifically cited recent protests against racism and police brutality in Portland, Seattle and Minneapolis, before pivoting to discuss the recent gun violence in Chicago.

“We have other cities that are out of control, they’re like war zones,” Trump said. “And if the city isn’t going to straighten it out, if local politicians or in this case, let’s say this for political reasons, they’re all Democrats. They’re liberal, leftwing Democrats. And it’s almost like they think this is going to be this way forever.”

A reporter asked if Trump intended to follow through on his Monday comment that the government would enforce change in the cities “even if we have to go in and take over”. The president deflected that question.