Video shows police shot downtown Cleveland resident in head, back with pepper balls as he tried to enter his apartment: ‘they just lit me up’

CLEVELAND, Ohio — Video provided to cleveland.com shows a band of police officers clad in riot gear shooting dozens of pepper-spray balls at a downtown Cleveland resident as he tried to get inside his apartment building the night of the May 30 riots. Kyler Lerz, who spent the evening of May 30 at a family

CLEVELAND, Ohio — Video provided to cleveland.com shows a band of police officers clad in riot gear shooting dozens of pepper-spray balls at a downtown Cleveland resident as he tried to get inside his apartment building the night of the May 30 riots.

Kyler Lerz, who spent the evening of May 30 at a family cookout in Mayfield Heights and did not attend that day’s protest, returned home about 11 p.m. and was walking from the parking garage to the Residences at 1717 when the officers came around the corner at East 9th Street and Superior Avenue.

Security video that Lerz provided to cleveland.com shows the 27-year-old had his back to the police and was facing the building’s door, with one hand in the air and his other holding his electronic key fob at his side when the first officer fired a round at his feet. Lerz, who said he was shouting that he lived in the building, turned his head just as a ball struck his left temple, less than an inch from his eye, and burst into a cloud of chemical dust. His backward Cleveland Indians cap absorbed the impact.

Lerz then swiped his fob to open the door and scampered inside, where another resident in the lobby tried to open the door and tell police that Lerz lived there, he said. One officer then reached out, holding the gun with one hand, and fired another ball at the ground in front of the door.

“I was defenseless,” Lerz said. “It was completely over the top. They could have just waited five seconds for me to walk in the door.”

He added, “it was excessive force.”

The video and Lerz’s accompanying account are the latest depictions of law enforcement using crowd-control munitions on people who appeared to pose no threat during the chaotic protests that devolved into riots and looting. Police and sheriff’s deputies met aggressive protesters with pepper spray, flash grenades and other munitions.

Cuyahoga County and Cleveland police released hours of security camera and police helicopter video that contradicted some claims police made in the days after the protest.

Videos that Lerz and another witness provided to cleveland.com shows what appear to be dozens of officers from multiple law enforcement agencies marching in the street just before Lerz was shot.

Cleveland Police Sgt. Jennifer Ciaccia, on Thursday, did not respond to requests for comment about Lerz’s account and the video of the incident, including a request to confirm whether any of the officers who fired pepper balls at Lerz were Cleveland officers.

Protesting ‘is not my scene’ Kyler Lerz, 27, was shot by police with pepper balls in Cleveland on May 30, after riots had ravaged downtown. Lerz, who did not attend any protest activity, was trying to walk into his apartment building when police shot him in the head and back with the rounds.Courtesy of Kyler Lerz

Lerz works as an executive financial consultant for a major downtown company and has lived and worked downtown for more than five years. He comes from a conservative Italian family and cares far more about Cleveland sports than politics. He said he has never been to a protest.

“I’m a pretty mellow person,” he said. “That’s not really my scene.”

Lerz recalled a week before the protest, and before a Minneapolis police officer knelt on George Floyd’s neck for nearly nine minutes, he was in line at a Dunkin’ Donuts when a Cleveland police officer walked in and got in line behind him. He said he recognized the officer as the one who directs traffic in front of his apartment building, who is also known among the residents of the building for shouting orders at drivers as they’re trying to navigate rush-hour traffic.

Lerz said he introduced himself as one of the people the officer has yelled at, and the two shared a laugh. Lerz then bought the officer’s coffee.

“As far as police, I’ve always thought there are some bad eggs, but I respected the fact that it’s a difficult job,” he said.

He and his fiancé just bought a house in his hometown, and he spends most of his days preparing to move, he said in an interview Wednesday.

“This isn’t exactly how I wanted to leave downtown,” he said.

‘I half-expected to…see my guts spilling out of me’ 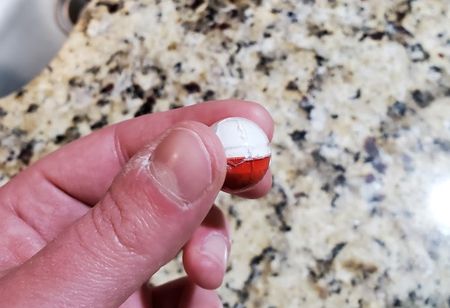 Kyler Lerz holds one of the pepper balls that police fired at him outside his apartment building in Cleveland on May 30, 2020.Courtesy of Kyler Lerz

Lerz said he left his apartment sometime around 5 p.m. May 30 to go to a cookout at a relative’s house and didn’t pay attention to any news while he was with his family.

The news he missed included the demonstrations that began at 2 p.m. at the Free Stamp had devolved into riots about an hour later after police met protesters throwing bottles with pepper spray and flash grenades at the front entrance of the Justice Center. He also missed word that the city enacted an 8 p.m. curfew and called in the Ohio National Guard after the riots spread throughout downtown with groups setting fire to police cars and buildings and looting stores.

Lerz made his way back to his apartment after 10 p.m. and found police blocked off several highway exit ramps into downtown.

He said he couldn’t believe his eyes when he made it into downtown and saw the widespread devastation, including vandalized businesses and broken windows accompanied by the persistent sounds of sirens throughout the city.

The protesters smashed windows at the deli and the furniture store next to his apartment’s lobby. Smoke and a chirping alarm emanated from the furniture store, he said. He pulled into the parking garage on Superior Avenue next to his building and saw the apartment building’s head of security, who is not usually working on weekends, walking with someone out of the building. Lerz parked his car and went inside, and noticed that someone smashed the apartment’s lobby windows and glass covered the floor.

He took the elevator up to his room to grab a drink of water, and then went back to the garage to catch the security guard and ask if it was safe for him to stay in the building.

The guard was gone, so Lerz said he walked out onto the sidewalk to try and find him.

Lerz said a man he didn’t know came up to him and hugged him, and the group of police officers turned the corner.

“Where am I supposed to be retreating to?” he wondered as he recounted his experience in an interview with cleveland.com.

He fished his fob out of his pocket to enter the building and then heard the first gunshot that struck the ground by his feet. Then the round struck his temple, and police unloaded. Lerz was struck 10 more times up and down his back before he made it in the door.

“I didn’t know what I was being shot with,” he said. “You just hear the sound of rifles going off, and your adrenaline is pumping. I half-expected to walk inside and see my guts spilling out of me.”

Lerz said once he was in the building, he began to cough and gag from the chemical powder. The other resident, Anthony Body, came to his aide, and he too started coughing and gagging. Body choked on the chemicals until he threw up, Lerz said.

“He wasn’t doing anything wrong at all,” Body said in a Friday interview. “He was literally walking to the door. He threw his hands up and said, ‘I live here,’ and they kept shooting.”

Body said after Lerz got into the lobby, he kicked the apartment door back open to tell police that Lerz lived in the building when the video shows an officer fire a final pepper ball into the ground in front of Body.

Video that Body provided to cleveland.com shows Body on his hands and knees in the lobby, seconds after the incident, choking on the fumes from the munitions.

Lerz kept one of the cracked balls, a red-and-white hard plastic sphere the size of a recreational paintball, and has kept the clothes he wore that day in a plastic bag. He said the powder is still strong enough to make him cough and gag if he gets within a few inches of his clothes.

Lerz said the way the officers treated him during those 19 seconds brought the urgency of police reform into his life in a way he would have never imagined.

“When I see things on the news, I don’t feel so disconnected anymore,” he said. “This was really the first time where I was just like, well I guess I’m not immune to it, either.”

He said he doesn’t have an opinion about the so-called “defund the police” movement, which calls for the paring back of police services in favor of funding social, mental health and substance abuse services. He thinks police officers need to undergo much more rigorous schooling and training than they do now, and that they should also be paid more money.

“The whole reason that any of this started was based on a bad egg in a profession that doesn’t have room for bad eggs,” he said, referring to the officer who is now facing murder charges in Floyd’s death.

It’s also shown him the inquisition that victims often face, he said. Some of his friends and his family members were quick to ask him what he did to put himself in the position to be fired upon by police, and then met him with “overwhelming disbelief” when he said he did nothing wrong, he said.

“I understand the idea of victim blaming,” he said. “It’s like, ‘OK, let’s put the person who suffered this in the position to have to defend themselves in every way possible.’”

Looking back on the situation, Lerz still doesn’t know what he could have possibly done differently.

Lerz reached out to cleveland.com after seeing its stories on Forsee and Sanders. He said he has talked with attorneys but hasn’t decided whether to file a lawsuit.

He told cleveland.com he would rather see money put into a few downtown businesses who suffered extensive damage during the riots.

“I’ve been down here a long time and I don’t want to see all the progress we made be destroyed over one event,” he said.

Couple shot with projectiles while photographing Justice Center damage during Cleveland protests: ‘it felt like we were just target practice’

Man who lost eye to police-fired bean bag round during Cleveland’s George Floyd protests: ‘I did not deserve this’