‘We may have to ration’: US food banks face shortages as demand surges

Food banks face going millions of dollars over budget as they struggle to meet surging demand from those hit hard by mass layoffs caused by the coronavirus pandemic. Across the US, not-for-profit groups are buying truckloads of increasingly expensive food to cope with the sharp increase in the “new needy” – and the dramatic decline

Food banks face going millions of dollars over budget as they struggle to meet surging demand from those hit hard by mass layoffs caused by the coronavirus pandemic.

Across the US, not-for-profit groups are buying truckloads of increasingly expensive food to cope with the sharp increase in the “new needy” – and the dramatic decline in donations from supermarkets left empty by panic shoppers.

‘A perfect storm’: US facing hunger crisis as demand for food banks soars

The pressures are widespread and growing, according to more than 20 food banks and pantries across 15 states consulted by the Guardian. For example, in Pennsylvania, food banks are spending an extra $1m a week and yet still turning hungry families away.

In Alabama, one pantry looks set to go $3.6m over budget by August as food purchases and running costs – electricity, cleaning materials, boxes and overtime – have tripled: “We’re applying for grants as fast as we can,” said Jenny Waltman from Grace Klein pantry in Birmingham.

The recent rise in public donations is unlikely to offset projected shortfalls.

“We have enough food for the next month,” warned Lisa Scales, president of Pittsburgh food bank where the money spent buying food has tripled. “With so many businesses shutting, we’re concerned community donations won’t sustain this level.”

The economic fallout of the global health crisis has seen record numbers of first-timers – people who have never previously needed food aid – flocking to new drive-thru distribution centres, which have been created to comply with social distancing rules.

Queues up to six miles long have become common at these pop-up collection points as far afield as San Antonio, Las Vegas, and Cleveland, where thousands of recently furloughed and unemployed people wait hours for grocery boxes.

As demand escalates, the price of non-perishable staples such as peanut butter, eggs, canned vegetables, beans, pasta, rice and jam is soaring, while supplies are running low with four- to eight-week delays and bottlenecks reported across the supply chain. 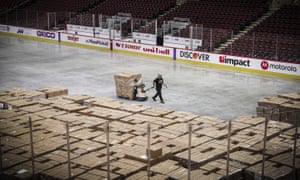 A worker moves food onto the floor of the United Center in Chicago, Illinois, on 20 March. Photograph: AP

The wholesale cost of rice has almost tripled and won’t be delivered until June, according to one Pennsylvania-based distributor that supplies more than 40 food banks. “Canned fruit and veg are very hard to get, rice and pasta is challenging, and costs have gone crazy as manufacturers pay more for labor, food and transport,” said Mike Fellinger.

“If you find rice it’s like gold,” added Ron Mizutani, president of the Hawaii food bank.

In response, innovative schemes have emerged to take advantage of an abundance of perishable produce such as tomatoes, apples and milk which would otherwise be dumped or left rotting in fields. An estimated 30-40% of the US food supply is wasted, which is the equivalent to throwing out $161bn of produce annually.

However, in one plan, Feeding Florida is paying local farmers to continue harvesting thousands of acres of crops, some of which is turned into freezable soups, sauces and ready meals by a network of idle restaurateurs.

The unfolding public health crisis has triggered the worst economic crisis in almost a century, exposing the precarious state of millions of working Americans thanks to weak labor rights, eroded government safety nets and low wages.

When you see a Lexus in line at 4am prepared to wait six hours, you know there’s real need

“It’s not surprising to see so many ‘new needy’, when even before the pandemic, millions of working Americans were already living on the edge of poverty, making tough choices between food and rent and bills every month,” said Ellen Vollinger, legal director at the Washington-based Food Research and Action Centre (Frac).

In 2019, about 40 million Americans received free meals or groceries through a network of 200 food banks and 60,000 pantries, schools, soup kitchens and shelters, according to Feeding America. The working poor, elderly and disabled and infirm accounted for the vast majority of recipients.

Even before the pandemic, half of American adults had either no emergency savings or not enough to cover three months of living expenses, according to Bankrate’s 2019 financial security index.

Since then, more than 22 million people have filed for unemployment benefits, though the true number of layoffs is probably significantly higher. 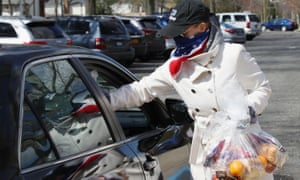 For instance, at pantries in Silicon Valley, demand is increasing about 50% each week, with first-timers such as security and cafeteria staff furloughed by tech companies, teachers and restaurant workers accounting for more than half of those needing food.

“It’s not surprising. We already knew a lot of people are living paycheck to paycheck,” said Leslie Bacho, chief executive of Second Harvest food bank, which spent $250,000 on cleaning supplies in March.

In Las Vegas, drivers of luxury vehicles queued for food boxes. “When you see a Lexus in line at 4am prepared to wait six hours, you know there’s real need,” said Larry Scott from Nevada’s Three Square food bank.

Last week in San Antonio, Texas, an unprecedented 10,000 people showed up in their cars for a pop-up distribution centre – a drive-thru service which typically attracted 400 before the layoffs. That day, 25 semi-trucks of food were handed out, much of it to newly laid off hospitality staff whose last paycheck was already gone, according to Eric Cooper, president of the food bank. 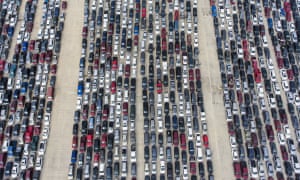 People wait in their cars at Traders Village for the San Antonio food bank in Texas on 9 April. Photograph: William Luther/AP

As demand rises, Cooper warns that supplies will run short: “The only thing we can do is ration and give families less … I would challenge our federal government to put systems in place that allow for wasted food to go to families we are feeding. It’s unconscionable.”

As the coronavirus economic hurt intensifies, federal aid is slowly starting to trickle down to ordinary people, including the $1,200 stimulus payment for those with bank accounts.

I already fear we’re not reaching everyone who needs help, and we haven’t seen anything yet

The rescue packages did expand the food stamps programme (Snap), but the Department of Agriculture (USDA) has so far refused to fully extend eligibility using available disaster powers. “This would help tackle hunger and stimulate the economy, but for some reason the USDA isn’t using all the tools in its box,” said Vollinger from Frac.

It’s unclear when or how the country will return to some semblance of normal, meanwhile America’s hunger crisis is likely to last months – or longer.

Kristin Warzocha of Greater Cleveland said: “I already fear we’re not reaching everyone who needs help, and we haven’t seen anything yet! We will do everything in our power, but philanthropy is not going to fix this crisis.”