Intense protests against a divisive Indian citizenship law that excludes Muslims have spread to university campuses across the country, fuelled by a brutal police crackdown on a demonstration in Delhi at the weekend. Police entered the Jamia Millia Islamia University (JMI) campus in the capital on Sunday and detained more than 100 students, beating activists

Intense protests against a divisive Indian citizenship law that excludes Muslims have spread to university campuses across the country, fuelled by a brutal police crackdown on a demonstration in Delhi at the weekend.

Police entered the Jamia Millia Islamia University (JMI) campus in the capital on Sunday and detained more than 100 students, beating activists in the street and firing teargas. JMI was shut on Monday, as were nearby schools and offices, after barricades and buses were set alight during the protest.

Anti-riot police also subjected students marching at Aligarh Muslim University in Uttar Pradesh on Sunday to alleged brutality, reportedly firing teargas into crowds and arresting dozens. An internet block was implemented in the area on Sunday night and remained in place on Monday in an attempt to quell the mounting unrest.

The citizenship amendment act, signed into law on Thursday, allows tens of thousands of Hindu, Christian, Jain, Buddhist and Sikh migrants from Bangladesh, Pakistan and Afghanistan to claim Indian citizenship. The same will not apply for Muslims.

By Monday protests had spread to university campuses in the cities of Mumbai, Hyderabad, Chennai, Bengaluru, Chandigarh and Kolkata. In Lucknow students pelted police with stones after they fired teargas at demonstrators.

“They fired teargas shells at us, before they resorted to caning us ruthlessly,” Usmani said. “They did not even spare the girls. I received several injuries mostly from the beatings by the police. I fell unconscious. Some senior students took me to a hospital where I received medical treatment.”

Police have denied using violence against female protesters, but Usmani alleged that was not true.

Mohammad Faisal, studying a Masters in social work, was also on the JMI campus on Sunday. “The policemen entered the library and mosque inside our campus and beat up the students mercilessly who were studying or offering prayer and in no way were connected to the protests yesterday,” said Faisal. “Police fired teargas shells inside the library. There was a blind student in the library then. He started crying loudly. Police even beat up that student.”

Amnesty India said: “Violence against peacefully protesting students cannot under any circumstance be justified. Allegations that the police brutally beat up and sexually harassed students… must be investigated.”

The BJP government has defended the legislation as no more than a means to assist persecuted minority Hindus from neighbouring Muslim-majority countries. However, the government, led by Narendra Modi, has an openly Hindu nationalist agenda and wants to reshape India as a Hindu rather than secular nation. Since he first came to power five years ago, he has introduced numerous measures which opponents say divide the country down communal lines, with the aim of ostracising India’s 200 million minority Muslims.

Rahul Gandhi, the former head of the opposition Congress party, tweeted that the law was a “weapon of mass polarisation unleashed by fascists”.

Nationwide protests against the new law began in the north-eastern state of Assam last Wednesday. The act is particularly sensitive in the state, not only because of its religiously divisive nature but also because many local people see the granting of citizenship to those from other countries, Hindu or Muslim, as a threat to their culture.

On Sunday more than 6,000 people took to the streets in the state’s biggest city, Guwahati, where police and military troops were deployed, a mobile and broadband internet blockade remained in place for the forth day in a row and a night-time curfew imposed. On Monday, thousands again turned out for the beginning of a series of Satyagarha, meaning non-violent protest, but were prevented from marching by the authorities. About 150 organisers and activists were arrested by police and held in a makeshift open air jail in one of the city’s parks.

“Our slogan is very clear, either scrap CAA or arrest us. They have chosen to arrest us,” said Samujjal Bhattacharya, chief adviser of the All Assam Students Union, which has been leading the protests.

Gitanjali Deka, a banker, said he had been on the streets protesting for days. “None of the government officials or ministers have met the public. They aren’t talking to us; 125 people in parliament cannot decide our state’s future,” he said. 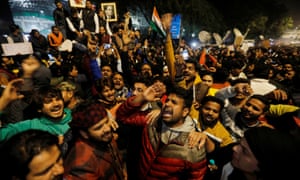 Demonstrators shout slogans during a protest against a new citizenship law in Delhi. Photograph: Adnan Abidi/Reuters

The Assam protests have proved to be some of the bloodiest so far, with the death toll reaching six over the weekend.

Protests also escalated in West Bengal. The first of the state-organised marches against the law took place on Monday, led by the West Bengal chief minister, Mamata Banerjee, in Kolkata, who vowed that the citizenship amendment act would be implemented “over my dead body”.

They follow days of violence across the state, which is home to around 25 million Muslims. Demonstrators set fire to tyres, staged sit-ins on main roads and railway tracks, and torched trains and buses. Riot police were brought in to disperse protesters and a block on the internet was implemented in some areas.

‘They will lock us up or just kill us’: Muslims fearful in West Bengal

Several hundred protesters also took to the streets in Kerala, another state that has said it will not allow the law to be introduced.

In his first comments on the unrest, Modi tweeted: “Violent protests on the Citizenship Amendment Act are unfortunate and deeply distressing. Debate, discussion and dissent are essential parts of democracy but, never has damage to public property and disturbance of normal life been a part of our ethos.”