Police made more than 82 arrests in seven simultaneous protests, amid the first general strike in more than 50 years. Teargas was deployed in at least five different locations, with police appearing to fire directly at protesters in several locations. Rubber bullets were also used. Fights broke out between protesters and men armed with long

[The protests have] seriously undermined Hong Kong’s law and order and are pushing our city, the city we all love, and many of us helped to build, to the verge of a very dangerous situation.

That’s all for now. Thanks for reading today.

A journalist has been arrested, according to the South China Morning Post. 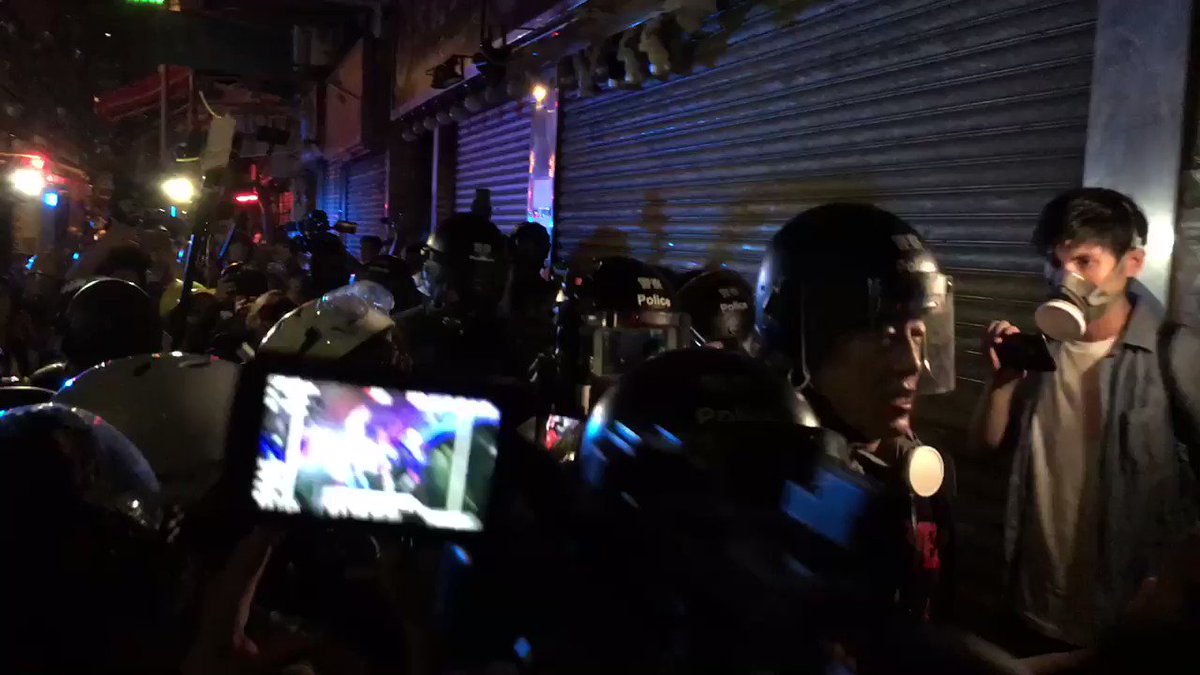 BREAKING A journo was arrested in Sham Shui Po as police accused him of assaulting police officers pic.twitter.com/1iNS3Zlp8U

Bloomberg’s Aaron McNicholas has tweeted this video of a motorist being attacked by protesters.

The driver did go through a protester roadblock which consisted mostly of traffic cones, but from my vantage point, he did not do so at high speed in a manner that suggested he intended to hit anyone. But paranoia has set in for some people #antiELAB

Rubber bullets are being fired at protesters from the top floor of the police station in Tin Shui Wai, according to reports.

#LIVE: Tear gas is continuously fired at protesters in Tin Shui Wai. Everyone is crouching and taking cover under umbrellas as rubber bullets are fired from the top floor of the police station https://t.co/4zOXMH4fU9 #HongKongProtests pic.twitter.com/JMgwR6XZj5

Also note that everyone is crouching and taking cover behind umbrellas because police are shooting rubber bullets and aiming from the top floor of the #TinShuiWai station. pic.twitter.com/mUfgemUFId

Christy Choi has the latest from North Point station, where she has spoken to a witness who said he witnessed an attack on protesters by ‘men dressed in white’.

Inside the station it’s serious business as some protesters get kitted out. Some are carrying bamboo poles, others makeshift shields made from foam bodyboards, others are handing out masks. Knowing that the authorities could potentially track their movements on the public transportation cards, a few people are standing by ticket turnstile at the ready for anyone arriving clad in black.

Outside, throngs of protesters gathered to block traffic while pointing lasers at apartment windows, saying those inside had dropped things on protesters earlier.

Nearby, 33-year-old Mr Cheung, a hotel employee who declined to give his full name, said he witnessed an earlier attack just past 8 pm local time on protesters by men dressed in white .

“Some of the residents told us, 20 of so guys in white shirts holding rods were standing at this junction. The information spread quickly over Telegram … some of the protesters headed to the police station they came back. Both of us [protesters and men in white] shouted at each other, and they rushed towards us and clung to the barricades and beat us. Then, when more of us came, they ran up that uphill road and into the building and are hiding … Residents say they’re the gangsters from Fujian and told us to leave, but as you can see the protesters are staying to defend and prevent them from coming back.” 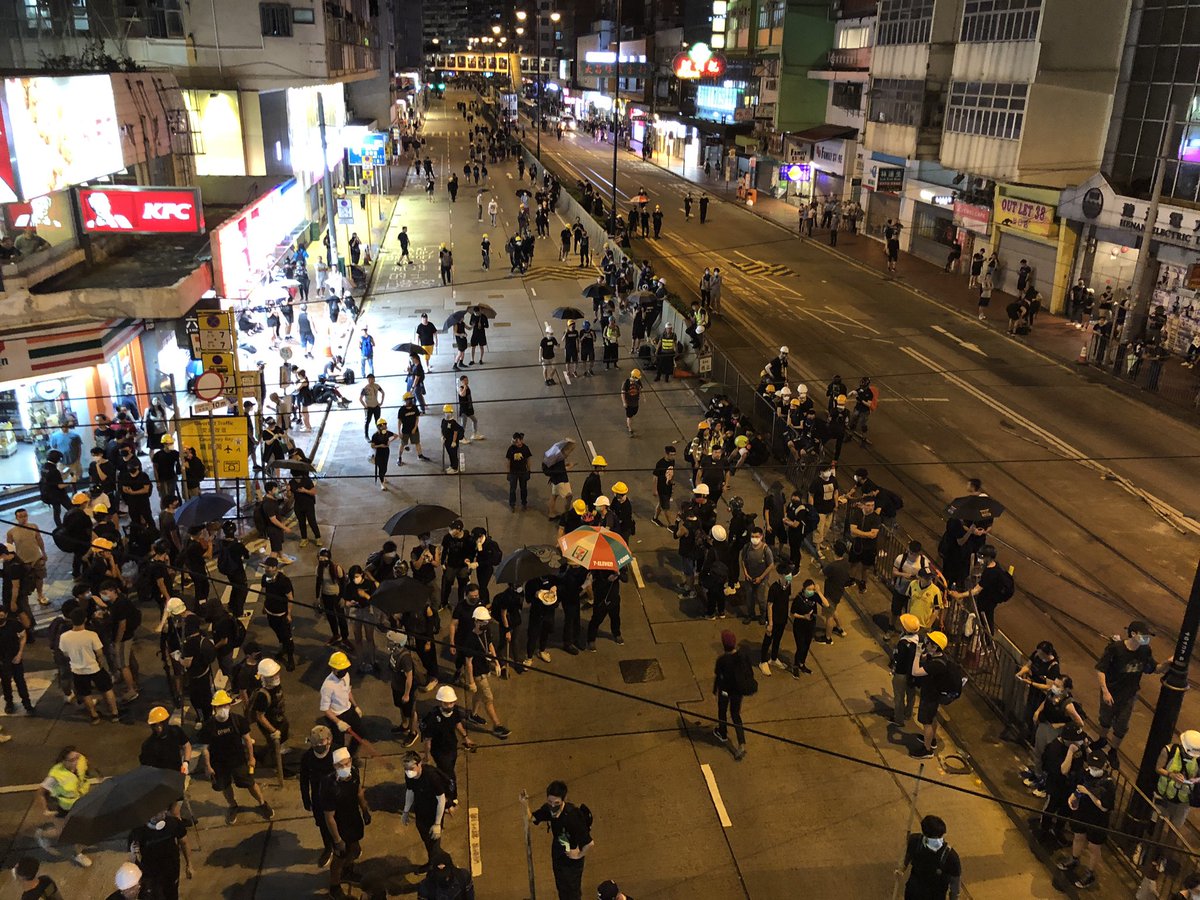 Lasers and spotlights being pointed at an apartment in North Point protesters are saying threw things down at them from above. #antiELAB #HongKongProtests They’re giving this one and a few others a wide berth and warning people about them. pic.twitter.com/ftvKZBdoAn

Some protesters were also detained in Wong Tai Sin when police charged protesters. They pulled back to a main road they had occupied earlier and others managed to leave by the train.

At least nine were detained by police, a witness said. Protesters think the police’s latest tactics are not intended just to disperse them but to catch and arrest them.

Protesters leaving Wong Tai Sin say the ‘frontline’ is still deciding where to go, choosing from among four locations where clashes are occurring. They are going to a safe house now, a primary school, to rest and wait.

Police in several locations appear to be making a number of arrests, after protester lines were charged.

In Wong Tai Sin, several protesters were arrested after riot police suddenly advanced. Legislator Jeremy Tam said that police charged even though the letter of no objection was meant to last until 11:59pm on Monday night.

Meanwhile, demonstrators have been pushed back from North Point police station. 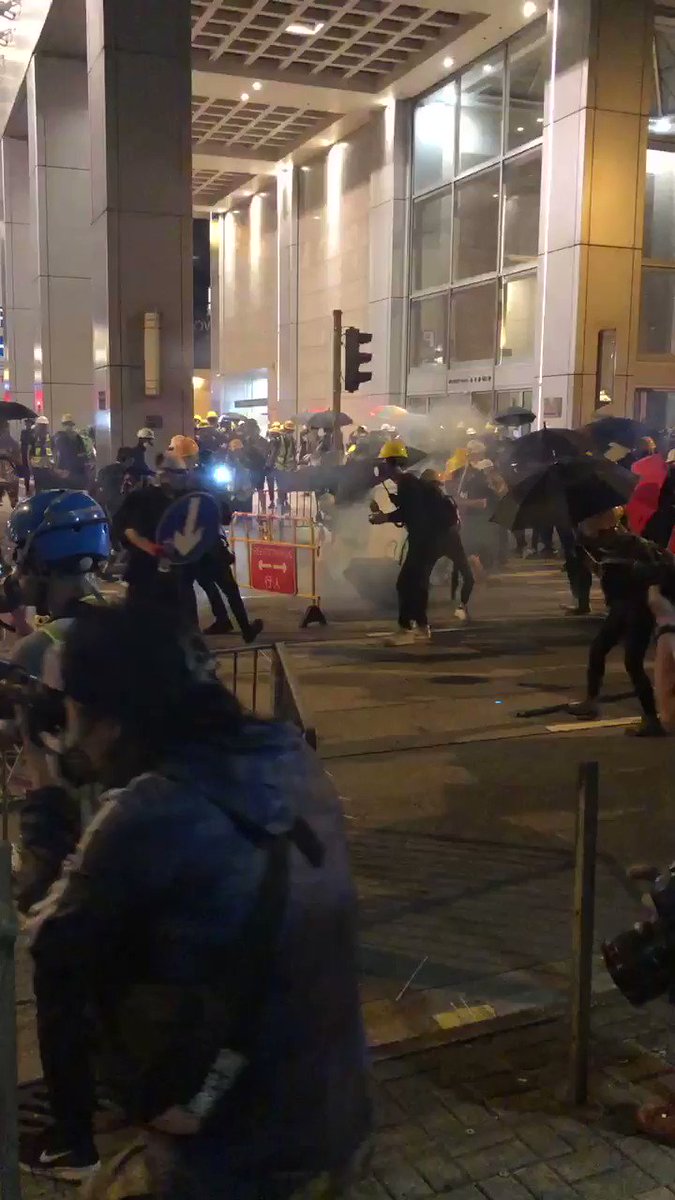 A large group of protestors are blocking roads extensively and setting fire to miscellaneous objects, posing a serious threat to the safety of the road users at scene. The protestors are surrounding and attacking various police stations and the adjacent Disciplined Services Quarters, hurling igniting objects and hard objects, making damages to the premises.

The police strongly condemn the violent acts and warn the protestors to stop all illegal acts immediately. Police is using minimum force to disperse the protestors.

Meanwhile, there is a standoff between protesters and police in the Wong Tai Sin area.

Some #HongKong police officers are calling on protesters to disperse immediately, as police was guarding the entrance to the disciplined services quarters.

The largest contingent of protesters is now moving through North Point.

The crowd is moving through North Point. Reports of some minor skirmishes with Triad types here earlier but appears quiet now. It would be a brave Triad gang facing a crowd this size. There are thousands. pic.twitter.com/QLHzQJ4OyL

The report room services at Tin Shui Wai and North Point police stations have been temporarily suspended, authorities have announced.

Elsewhere, at Tun Mun police station, protesters have thrown bricks at the building and have lit fires just outside.

Fights have broken out between protesters and men armed with long sticks in North Point, just west of Causeway Bay.

BREAKING – Fighting has broken out at North Point between Protesters and local residents. #HongKongProtests #HongKong pic.twitter.com/6MarDFjeAP

Earlier, a group of men were pictured nearby.

The protests are set to go on into the night, as riot police amass and protesters congregate at a number of locations – most notably Causeway Bay.

Lily Kuo has the latest from Wong Tai Sin

Hundreds of protesters have been camped outside the police dormitory since a rally this morning. Demonstrators said the police began firing on them after the crowd spilled out on to a main road.

“They keep shooting teargas at us. The whole MTR station was filled with teargas,” said Harry Tsui, 25, a local resident. He added police have been holding up black and orange flags up throughout the day, warnings they will soon fire teargas and rubber bullets.

Protesters are shining lasers at the police dorm and some are throwing bricks at the windows. The police are firing canisters of teargas at the protesters from a distance, which demonstrators are quickly putting out. One protester managed to toss one back into the police dorm, causing the crowd of onlookers and protesters to cheer.

Police have now mostly cleared area outside the police dorms in Wong Tai Sin but are still holding up orange flag warning they will fire. #antiEALB #HKprotests pic.twitter.com/pZSEZJ9EW9

Agence France Press has this report on the choices facing China over the unrest in Hong Kong.

China has only tough choices as it looks to end more than two months of pro-democracy protests in its semi-autonomous southern city of Hong Kong.

The protesters have shown no signs of backing down, despite increasingly violent confrontations in which Hong Kong’s police have regularly fired tear gas and rubber bullets.

The protests were triggered by opposition to a planned law that would have allowed extraditions to mainland China, then evolved into a wider movement for democratic reform and a halt to eroding freedoms.

Here are the potential options for the central government as it seeks to end the crisis, and the problems associated with each:

Beijing’s current approach has been to express firm public support for the Hong Kong police and the city’s chief executive, Carrie Lam, while warning the protesters their actions are “intolerable”.

“Beijing has adopted an intimidation strategy and is trying to wait it out until at least early September, when (school) term starts – many protesters are high school and university students,” Hong Kong-based political analyst Dixon Sing said.

The party is also preparing for the 70th anniversary of the founding of modern China, and is unlikely to want to take antagonistic steps ahead of that.

The wait-and-see approach is similar to how it approached the 2014 pro-democracy “Umbrella Movement” in Hong Kong.

The 2014 events saw protesters occupy parts of the city for more than two months but faded away without winning concessions from Beijing after key leaders were arrested. But this may not be enough. By waiting, it risks further embarrassment for a government led by Chinese President Xi Jinping that tolerates no dissent.

“The protests in Hong Kong are a serious loss of face for Beijing, and presents a key political and strategic dilemma for the Chinese authorities – do we intervene, when, and how,” Michael Raksa, assistant professor at the S. Rajaratnam School of International Studies in Singapore, told AFP.

Beijing could pressure Hong Kong’s government into adopting a more conciliatory tone and finding some way to compromise with the protesters.

Their demands include an independent inquiry into police methods, and the permanent shelving of the extradition bill.

The government could also orchestrate Lam’s resignation, another key demand of the protesters. “Lam has become a colossal political liability both locally and internationally,” said Sing.

However doing so would be seen to be giving in to the protesters and rewarding their actions. “The likelihood of Beijing adopting non-violent, conciliatory measures is low,” Hong Kong-based political analyst Willy Lam told AFP.

The central government could step up its pressure and intimidation tactics against the protesters. There has already been increasingly strident condemnation from authorities and state media.

The Chinese military last week described the unrest as “intolerable” and released a slick propaganda video showing a drill of armed troops quelling a protest in Hong Kong. “At this stage, (Chinese president Xi Jinping) is gravitating towards a more hardline stance,” Lam said.

But if Beijing does not plan to carry out such threats, then there is a risk of needlessly causing further panic. This could trigger a flow of money and companies out of the global financial hub.

4. Send in the troops

The most dramatic – and risky – strategy for the central government would be to send in military reinforcements.

There is already a garrison of thousands of troops from the People’s Liberation Army (PLA) stationed in Hong Kong, though they generally keep a low profile.

While Hong Kong’s law states PLA troops “shall not interfere in the local affairs of the region”, it also says they can be deployed to “maintain public order”.

But this last resort could spell financial disaster for Hong Kong and wholesale global condemnation for the Chinese Communist Party.

“It would seriously undermine the political legitimacy of Xi Jinping and the CCP, both internally as well as externally, with widespread international condemnation reminiscent of the 1989 suppression of Tiananmen Square protests,” said Raksa.

The Chinese national flag has been taken down and thrown in the sea, as protesters set a tree alight outside the homes of police officers, the South China Morning Post has reported.

It is worth taking a look through the detailed reports in this thread too.

#LIVE: Protesters remove the national flag from a pole near the ferry pier in Tsim Sha Tsui. One man drops it into the sea https://t.co/et2a58CZmc