WWII D-Day Vet Had No one to Carry Casket After He Died, Then 6 Teens Arrived in Uniform

Our veterans have sacrificed their time with loved ones to fight for our country and freedom, in foreign lands. They certainly deserve our respect, just like this 93-year-old WWII veteran, who passed away with no one to carry his casket. However, on the day of his funeral, a group of young men arrived to honor 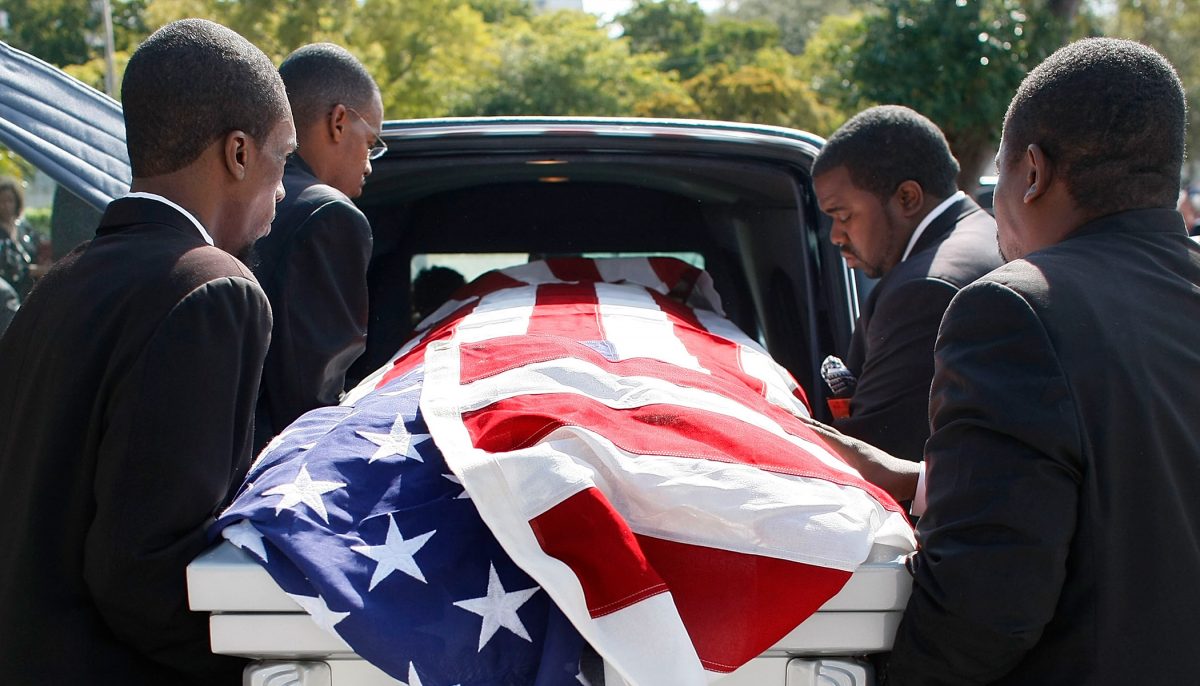 Our veterans have sacrificed their time with loved ones to fight for our country and freedom, in foreign lands. They certainly deserve our respect, just like this 93-year-old WWII veteran, who passed away with no one to carry his casket. However, on the day of his funeral, a group of young men arrived to honor this hero, whom they had never met.

Born on Jan. 27, 1924, Montgomery, Louisiana, resident Thomas Hunter was a WWII veteran who served in the Army from 1942 to 1949. He had participated in the D-Day invasion of Normandy to liberate Europe from the Nazis. Fortunately, he survived the war and worked in the oilfield before retirement. However, he was never married and had no children.

The 93-year-old spent his twilight years alone in a nursing home. When he passed away on Sept. 12, 2017, he was survived only by nieces, without any close male relatives, as he had outlived all his 11 siblings and cousins.

Hunter’s nieces were in a dilemma over who should carry their late uncle’s casket.

On the day Hunter was buried at Summerfield Cemetery near Colfax on Sept. 19, 2017, six young men clad in uniform appeared.

Thomas Edward Hunter, a World War II Veteran, who served our great nation at D-Day, passed away at the age of 93 on…

“The kids asked if it was appropriate for them to wear their jerseys, and I said absolutely it was, because you and this program stand for exactly what Mr. Hunter stood for when he was serving this country,” coach Lyn Bankston told The Town Talk, a local media outlet.

The young men helped carry Hunter, and they honored the veteran by giving him a hero’s send-off, topped off with a flag and a playing of Taps.

“These are all young men who are leaders in our program and our community,” coach Bankston said. “They know the sacrifice Mr. Hunter made and it meant something to them.”

Bankston said other than teaching the boys football, they also try to teach them “to value history and to recognize that so many people sacrificed so they could have the life they have.”

Congressman Ralph Abraham commended the six young men during a speech on the House floor.

“I am so inspired by the actions of Matthew, Brett, Justin, TJ, Christian, and Lee, as well as others in the community who gave Mr. Hunter the hero’s send-off he deserved. They didn’t know this man, but they knew that every veteran deserves to die with dignity and be honored for the sacrifices he made in defense of this nation,” Abraham said.

Abraham said the actions of the six teens represent what is truly important in America: country, community, family, God. He added: “Our flag and the nation it stands for is special because of veterans like Thomas Hunter who answered the call to serve. Thousands have given their lives for that flag and this nation, and they deserve our respect for their sacrifices.”

Our veterans deserve a hero’s send-off. Kudos to Winnfield Senior High School, its football coaching team, and the six gentlemen for making it happen at Hunter’s funeral.