BRASILIA (Reuters) – Deforestation in Brazil’s portion of the Amazon rainforest soared more than 88% in June compared with the same month a year ago, the second consecutive month of rising forest destruction under new President Jair Bolsonaro, who has called for development of the region. According to data from Brazil’s space research agency, deforestation

BRASILIA (Reuters) – Deforestation in Brazil’s portion of the Amazon rainforest soared more than 88% in June compared with the same month a year ago, the second consecutive month of rising forest destruction under new President Jair Bolsonaro, who has called for development of the region.

The data showing an 88.4% deforestation increase is preliminary but indicates the official annual figure, based on more detailed imaging and measured for the 12 months to the end of July, is well on track to surpass last year’s figure.

In the first 11 months, deforestation already has reached 4,565 square km (1,762 square miles), a 15 percent increase over the same period in the previous year. That is an area larger than the U.S. state of Rhode Island.

Environmentalists have warned that Bolsonaro’s strong remarks calling for the development of the Amazon and criticizing the country’s environmental enforcement agency Ibama for handing out too many fines would embolden loggers and ranchers seeking to profit from deforestation.

“Bolsonaro has aggravated the situation. … He has made a strong rhetorical attack,” said Paulo Barreto, a researcher at Brazilian nongovernment organization Imazon.

The new data coincides with more pressure on the government to protect the environment under the terms of the free trade deal between the European Union and South American bloc Mercosur agreed to last week. Brazil will take action if concerns about an increase in deforestation are confirmed, the agriculture minister said on Wednesday.

The rainy season through April appeared to have held off a spike in deforestation that subsequently came with the dry season starting in May.

FILE PHOTO: A man, who was hired by loggers to cut trees from the Amazon rainforest, sits on a tree next to his chainsaw in Jamanxim National Park, near the city of Novo Progresso, Para State, Brazil June 21, 2013. Picture taken June 21, 2013. REUTERS/Nacho Doce

Deforestation rose 34% in May compared with the same month a year ago.

Bolsonaro’s office declined to comment, saying questions would be addressed by the Environment Ministry.

“We are adopting all measures to combat illegal deforestation,” Environment Minister Ricardo Salles told Reuters. “This week we had 17 enforcement teams simultaneously in all of the Amazon from Ibama.”

Brazil is home to 60% of the Amazon, which is the world’s largest tropical rainforest and is seen as vital to the global fight against climate change.

Grains trader Cargill, the largest privately held U.S. company, said last month that the food industry would not be able to meet a pledge to eliminate deforestation in their supply chains globally by 2020 and committed to do more to protect native environments in Brazil.

While the final text of the EU-Mercosur deal has not been released, an outline from the EU states the agreement includes a provision that the Paris Agreement on climate change must be effectively implemented along with other commitments to fight deforestation.

French President Emmanuel Macron had warned last week that he would not sign off on the deal if Brazil leaves the Paris accord. Bolsonaro met Macron at last week’s G20 summit and reassured him Brazil was in the Paris Agreement to stay.

Greenpeace forest strategist Paulo Adario said “all indications” are that deforestation will worsen under Bolsonaro, but he hopes news of a large increase will put pressure on the government to take action. 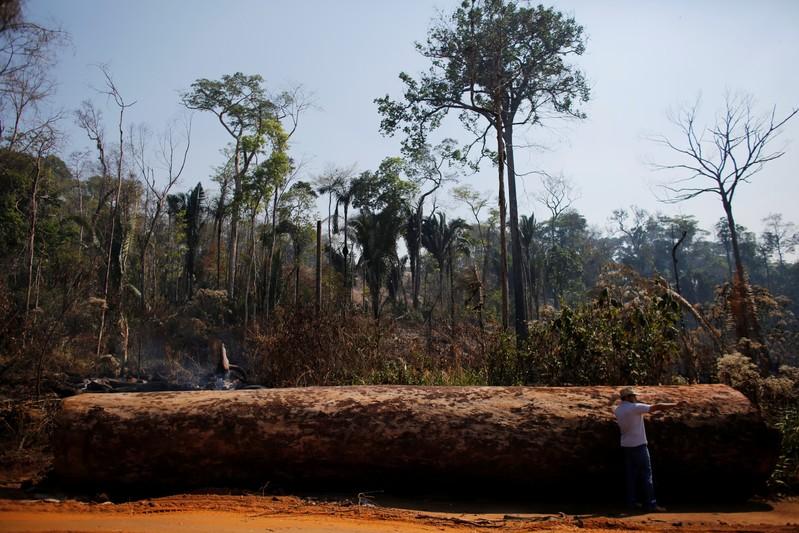 “When they have the final numbers, if it is really a lot, this will be a nightmare for Bolsonaro,” Adario said. “This is something that is really important from an international and Brazilian point of view because the Amazon is an icon.”