Western Europe is in the midst of an intense, dangerous, and possibly even deadly heat wave this week. The southern French commune of Villevieille recorded a temperature of 45.1 degrees Celsius (113.18 degrees Fahrenheit), breaking the country’s all-time record. The heat also set new temperature records in Germany and the Czech Republic this week. Other 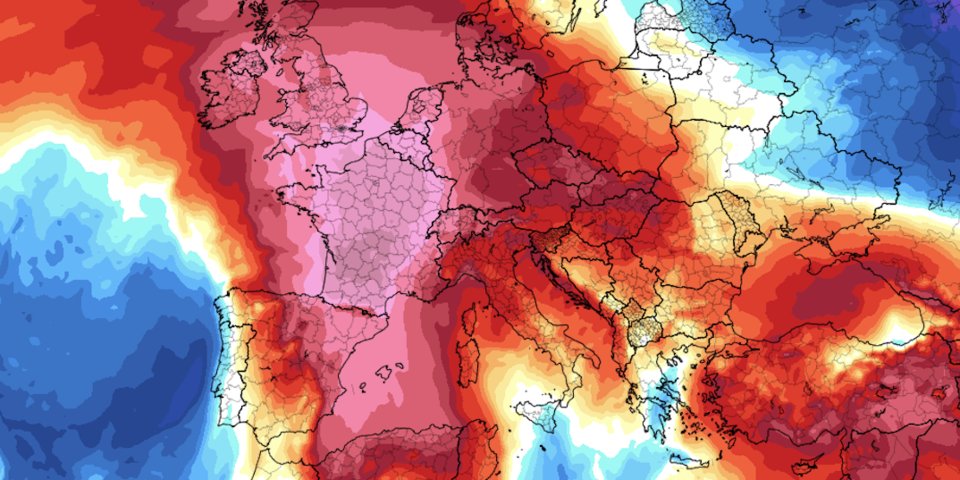 Western Europe is in the midst of an intense, dangerous, and possibly even deadly heat wave this week.

The heat also set new temperature records in Germany and the Czech Republic this week. Other countries like Italy, Spain, and Portugal are also grappling with temperatures much higher than normal.

It’s not clear when the heat wave will end.

Scientists have attributed the soaring temperatures to the combination of a storm over the Atlantic Ocean and high pressure over central Europe, which is importing hot air from the Sahara.

Read more: Europe’s hellish heat wave is caused by a high-pressure weather system unlike any ever seen before

Read more: I visited Pompeii in the middle of Europe’s deadly heat wave, and I couldn’t believe how many tourists braved the sweltering temperatures

People cool off in the sea in Nice, France, amid a massive heat wave on June 27, 2019. Eric Gaillard/Reuters

Read more: Bathing in fountains, new speed limits, and running naked down the freezer aisle: Here are all the ways people are trying to keep cool in Europe’s heat wave

Silvia Laplana, a meteorologist at Spain’s state-owned RTVE channel, tweeted images of the forecast temperatures in the country this week with the caption “El infierno is coming.” Infierno is the Spanish word for hell.

The sudden spike in temperature could be dangerous because the region is not accustomed to such high temperatures, which could put people at risk of heat-related ailments, Axios said.

Three people in southern France died of shock after plunging into cold water to escape the heat earlier this week. Two other people in Italy have died from heatstroke, The Local reported Thursday.

Helicopters drop water over a fire during a forest fire near Bovera, west of Tarragona, Spain, on June 27, 2019. Albert Gea/Reuters

Massive wildfires broke out in the northeastern Catalan province of Tarragona, forcing 53 residents to evacuate and killing hundreds of sheep already, The Guardian reported.

Read more: A pile of manure in Spain to spontaneously ignited in Europe’s record heatwave, and started a forest fire

The combination of high temperatures, low humidity, and high winds then caused the fire to spread, The Guardian reported. Buch tweeted that the fire was “on a scale not seen for 20 years.”

Tourists and Parisians cooling off in the water of the Trocadero fountain at the foot of the Eiffel Tower on Monday. Samuel Boivin/NurPhoto via Getty Images

Though heat waves are not uncommon in Europe, this one is unusually early. Experts say climate change is making heat waves more common.

“This increase in heat extremes is just as predicted by climate science as a consequence of global warming caused by the increasing greenhouse gases from burning coal, oil, and gas,” Stefan Rahmstorf, a climatologist at the Potsdam Institute for Climate Impact Research, told the Associated Press.

Heat waves like this will continue to worsen if countries do not cut their greenhouse-gas emissions soon, a group of scientists warned in a report published earlier this month.

Tourists at a fountain in front of the Pantheon in Rome on Monday.Alberto Pizzoli / AFP / Getty

Recent heat waves around the world have proven to be deadly.

At least 36 people have died during a prolonged heat wave in India, which has lasted more than 30 days, according to CNN.