Sign up for the This Land is your Land newsletter to get monthly updates on the threat to America’s public lands. Millions of tourists will head out into America’s national parks this summer in search of fresh mountain air. But according to a new report they should instead expect dangerous levels of pollution; roughly 96%

Sign up for the This Land is your Land newsletter to get monthly updates on the threat to America’s public lands.

Millions of tourists will head out into America’s national parks this summer in search of fresh mountain air. But according to a new report they should instead expect dangerous levels of pollution; roughly 96% of the nation’s parks are struggling with significant air quality issues.

The report, released yesterday by the National Parks Conservation Association (NPCA), found that some of the most popular parks, including Sequoia, Kings Canyon and Joshua Tree national parks and Mojave national preserve, were among the worst offenders. Last year, these parks recorded up to two months where ozone levels were considered dangerous –mostly in summer when visitation is at its highest.

In 88% of parks, the NPCA found that the elevated levels of air pollution were a direct threat to sensitive species. Air pollution is also exacerbating climate change, adding to a mounting list of threats to national parks that includes wildfire, drought and unnatural seasons.

“We are not doing right by the places that we most cherish,” said Stephanie Kodish, the Clean Air program director for the NPCA. “By protecting these places we are protecting each other, our communities and we are protecting the planet,” she says, emphasizing that the actions that need to be taken to safeguard the parks are the same needed to combat climate change and defend public health. 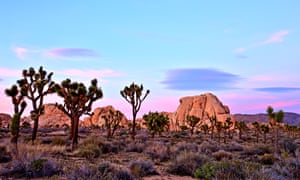 Bad air quality can cause lung damage, harm immune systems and increase inflammation, having lasting impact on the health of rangers and visitors. It also causes irreversible damage to the parks themselves. Ozone has the ability to affect soil, burn plants and harm habitats. From Yosemite’s ponderosa pines to the arid ecosystems of Joshua Tree, there are already signs of suffering, according to information released by the National Park Service, and the issue has been an urgent one for decades.

Independent researchers came to similar conclusions last year, detailing in a scientific study that, over the last two decades, air pollution in parks has rivaled that of the 20 largest major metropolitan cities, including Los Angeles and Houston. The study also concluded that bad air quality causes some people to stop visiting, sparking economic concerns, but there has still been an impact on visitors’ health.

“There were still tens or hundreds of millions of visitor days since the beginning of our study in 1990,” said Dr David Keiser, an environmental economist at Iowa State University and the lead researcher on last year’s study. “This is a tremendous amount of exposure to the US population and one of the things I don’t think too many people think about.”

Advocates believe the problems will only get worse as the Trump administration continues to repeal regulations and push for more drilling on public lands. The administration has overseen an 85% drop in EPA pollution enforcement, and just last week the Bureau of Land Management took the next step in a plan that would open more than 1.6m acres in California near these parks to fracking. 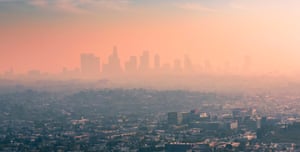 Another study found air pollution in national parks has rivaled that of cities such as Los Angeles. Photograph: Westend61/Getty Images

Still, compliance with the Clean Air Act requires states to protect national parks and new rules could help curb air contamination in the coming years. Under the Regional Haze Rule, states will have to submit updated plans for how they will address the pollution affecting the parks by 2021, and clean up their acts by 2028. The rule, implemented in 1999, set goals to return the air quality in parks to pre-pollution levels by 2064.

Kodish of the NPCA said there was still a long way to go. Some parks remain hundreds of years away from that mark, and states such as Utah and Texas are resisting the regulations. But she remained optimistic that, with growing appreciation of the parks and their importance, Americans will embrace the efforts.

“I hope that people think about our national parks as bipartisan unifiers. That the connection to our national parks is one that can help preserve our future, our history, our culture,” she said. “For the American people, they should serve as a reminder – and a warning cry.”