Why Andrew Yang thinks geoengineering could lead to war For the first time in recent memory, climate change has muscled its way into the US presidential election conversation, thanks in large part to politicians like New York Representative Alexandria Ocasio-Cortez making a case for a Green New Deal. But as budding Democratic candidates outline their environmental policy platforms for the 2020 US election, one 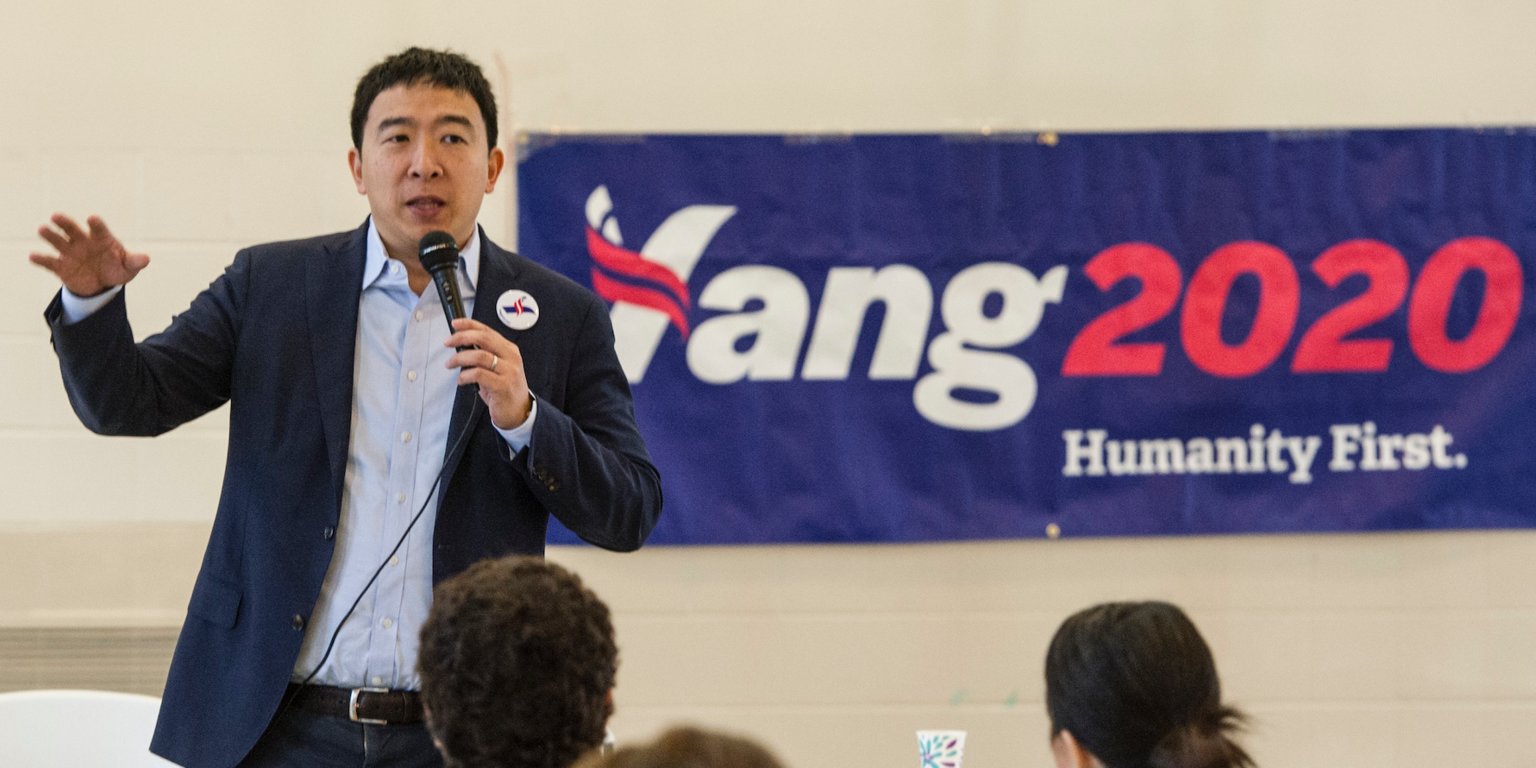 For the first time in recent memory, climate change has muscled its way into the US presidential election conversation, thanks in large part to politicians like New York Representative Alexandria Ocasio-Cortez making a case for a Green New Deal. But as budding Democratic candidates outline their environmental policy platforms for the 2020 US election, one man stands out with his unique approach.

Read More:Alexandria Ocasio-Cortez wonders whether people should have kids in a climate-ravaged world. So does this movement of ‘BirthStrikers.’

Andrew Yang, a longshot Democratic candidate campaigning on a platform of universal basic income, Medicare for all, and “human-centered capitalism,” believes ramping up clean energy use and curbing carbon emissions isn’t enough. He wants the US to take the lead on geoengineering — an umbrella term that encompasses a variety of controversial and not-so-controversial techniques to counteract climate change, not just slow it down.

The term evokes fantastical weather-controlling satellites, giant space mirrors that reflect sunlight, and carbon capture technology that floats around in the atmosphere eating planet-warming carbon. Yang believes these technologies, some of which have yet to be tested in the real world, are far from fantasy.

In fact, he thinks they’re a necessity if we want to combat our unstoppable march towards a warming planet. He also thinks the US needs to start as soon as possible in order to prevent a future war.

Yang believes if the US doesn’t hop in the conductor’s chair of the geoengineering train soon, a country like China will.

“We need be leaders in this and organize a global understanding, pooling knowledge and resources [around geoengineering] and make it so individual countries don’t make moves on their own,” Yang said. “Look, in 15, 20 years, China’s going to start geoengineering and they’re unlikely to ask permission.”

The term geoengineering refers to the use of technology to modify Earth’s atmosphere, and in recent years it has been floated as an option for battling climate change. There are two main types of geoengineering: carbon capture, which — as the name suggests — removes carbon dioxide from the atmosphere, and solar geoengineering, which involves modifying the sky with particles or clouds that reflect sunlight back into space to cool the planet.

Carbon capture is becoming widely accepted as a safe and potentially effective climate-fighting tool, but solar geoengineering critics argue the risks of experimenting with the delicate chemistry of atmosphere are too high.

“The reason I’m talking openly about geoengineering is that it seems highly unlikely that we’re going to reverse the trend of emissions,” he said, pointing out that the US comprises only 15% of global emissions.

“Even if we became extremely aggressive and forward-thinking in terms of our energy consumption we would still experience the worst effects of climate change if the rest of the world didn’t join us.”

In addition to carbon capture, he’s supportive of other technologies that are ultimately reversible if they doesn’t work, like shoring up melting glaciers with dirt to prevent warming ocean water from eroding their bases. A recent article in the journal Nature echoed Yang’s support on this, suggesting targeted geoengineering to preserve continental ice sheets deserved serious research and investment.

Yang’s website also states that he’s interested in cloud seeding, a way to make it rain by dropping silver ions into the atmosphere. This technology has already been tested by the Chinese and United Arab Emirates governments.

In an interview with Earther, Yang mentioned his enthusiasm for a giant space mirror that could deflect sunlight back in space — a step beyond seeding the atmosphere with particles to reflect more sunlight, a more commonly cited type of solar geoengineering.

He described aspirations of “a satellite with expandable mirrors” that could be launched into the atmosphere, and brought back to Earth if it proves ineffective.

Yang told Earther that the mirror was among his top geoengineering technology choices, because it’s reversible if something goes wrong.

That’s probably not the the case. One of the reasons that scientists are so concerned about solar geoengineering experiments is that most models predict that by deploying measures in one location, different effects will be seen in other spots around the globe. For example, if the technology gets deployed in the southern hemisphere, there could be more hurricanes in the northern hemisphere.

Even if a failed geoengineering technology returns to Earth, the atmospheric chemistry might be irreversibly altered. We could even end up damaging the ozone layer that protects us from harmful ultraviolet radiation.

If the US lets China take the lead in geoengineering, it could trigger war

Ultimately, Yang is pushing not just for the US to invest in geoengineering, but for world leaders to unite around it. It’s more than just about combating climate change; Yang also wants to ensure countries like China don’t get to call the shots decades down the line.

Yang said that if the US lets China start atmospheric modifications first as a rogue geoengineering nation, rather than as part of a global initiative, he expects the worst.

Opponents of geoengineering say it could eventually lead to military use of weather-altering technology. Shutterstock “I believe it could lead to war,” he said. “If 15 years from now, China is launching sulfur clouds into the atmosphere [spraying sulfur dioxide into the atmosphere helps form clouds — which could artificially cool the Earth], and they float over the ocean and wind up affecting the US, that could be taken really negatively.”

Yang said China is the perfect example of a country that could take the geoengineering reins if no one else steps in, noting that in some parts of the country, air pollution and smog can get so thick that people can’t see the sun and have to wear masks. “They have the money, resources, and public health stake in the problem.”

“This is something we should get ahead of as fast as possible,” he added.

Yang isn’t the only one who views geoengineering as an avenue for potential conflict.

Alan Robock, an environmental-science professor at Rutgers and geoengineering expert, has also expressed concern that a rogue country could go ahead with an atmospheric-transformation project.

If something went wrong elsewhere — perhaps a Category 5 hurricane slamming into a coastal city — it would be hard to immediately know whether that disaster was related to geoengineering. A conflict could ultimately could escalate to nuclear war, Robock previously told Business Insider.

While Yang doesn’t see geoengineering as a replacement for phasing out fossil fuels, instituting a carbon tax, and doing all we can to curb emissions (including rejoining the Paris Accords), he thinks it has to be part of the solution. And he believes other presidential candidates will glom onto his viewpoint soon enough.

While Yang hasn’t yet articulated a clear path towards implementation, he said the easiest thing to do is authorize a relatively modest amount of money, like from the National Institutes of Health, to fund research. “You don’t need a massive grant to make a huge difference,” he said.

He also wants to fund small-scale pilot studies, and invest in real-world implementation of carbon capture and solar geoengineering tech.

But the longshot candidate has a long way to go before his dreams of cloud seeding and giant space mirrors hit the policy docket.

Yang remains optimistic. “I’m the man to beat Trump in 2020,” he said. “Because the opposite of Trump is an Asian man who likes math.”