Habits come from what we do, not what we want to do A new study suggests repetition is the key to developing a new habit. The study bases its conclusions on the habits of digital rodents. Just keep at it — go to the gym, floss — and the desired habit will eventually stick. A paper, “Habits Without Values,” recently published in Psychological Review suggests that forming

A paper, “Habits Without Values,” recently published in Psychological Review suggests that forming habits is a matter of simply repeating the desired behavior until it sticks, not matter how little pleasure you derive from it. This conclusion comes from observing the habit-forming process of what the study refers to as “digital rodents” — computer models of mice — in a simulated environment of the authors’ design.

This finding fits in with earlier studies that determined habits form when a neural pathway activated by some action you’ve taken becomes reinforced through repetition. It’s why we often find ourselves making the same bad choice over and over: We’re not really choosing at all, but just traveling automatically down a familiar default behavioral pathway, as Gretchen Rubin explains in her book Better Than Before: Mastering the Habits of Our Everyday Lives. 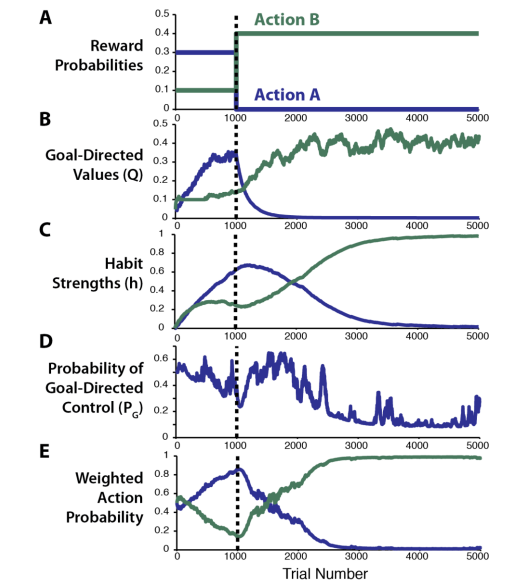 On the other hand, another approach

Not everyone is likely to agree with the new research’s conclusion. Some, including Charles Duhigg, advocate a reward system to help you stick to and learn a new habit you want to acquire.

Study co-author Elliot Ludvig of The University of Warwick’s Department of Psychology tells Warwick News & Events, “Much of what we do is driven by habits, yet how habits are learned and formed is still somewhat mysterious. Our work sheds new light on this question by building a mathematical model of how simple repetition can lead to the types of habits we see in people and other creatures.”

For the study, Ludvig and collaborators Amitai Shenhav and Kevin J. Miller developed a computer model in which digital rodents were presented two levers. One lever would be the “correct” one associated with a reward. The other, the “wrong” one, was associated with no reward. However, during the experiments, the “correct” lever only sometimes produced the reward; at those times it was the “wrong” one that did.

If the rodents had been trained for just a brief period, they were less habituated to the “correct” lever and they were more likely to look for a reward from the other one.

On the other hand, it they had been trained for a longer period of time with a “correct” lever that consistently produced a reward, they were less likely to revise their behavior when the roles of the levers changed — they kept thumping away on the “correct” one even though they got no reward. This told the researchers that the habit they were used to was more compelling than the desire for a reward.

Shenhav explains, “Psychologists have been trying to understand what drives our habits for over a century, and one of the recurring questions is how much habits are a product of what we want versus what we do. Our model helps to answer that by suggesting that habits themselves are a product of our previous actions, but in certain situations those habits can be supplanted by our desire to get the best outcome.”

Also implied by the experiments are possible mechanisms at work behind Obsessive Compulsive Disorder and Tic Disorder. Next up for the researchers is seeing if the results can be replicated with non-digital humans.

This article was originally published by Big Think.

The views expressed in this article are those of the author alone and not the World Economic Forum.