The first trucks carrying humanitarian aid for Venezuela have arrived at the Colombian border city of Cúcuta, as opponents of Nicolás Maduro step up efforts to further isolate the embattled president. The convoy of two large articulated lorries and seven smaller trucks reached the Tienditas international bridge on Thursday, a day after Venezuelan authorities blockaded

The first trucks carrying humanitarian aid for Venezuela have arrived at the Colombian border city of Cúcuta, as opponents of Nicolás Maduro step up efforts to further isolate the embattled president.

The convoy of two large articulated lorries and seven smaller trucks reached the Tienditas international bridge on Thursday, a day after Venezuelan authorities blockaded the crossing with shipping containers and a fuel tanker.

Maduro denies the existence of a humanitarian crisis in Venezuela, and members of his administration have denounced the aid effort as a foreign conspiracy designed to destabilize their government.

Opposition activists and their supporters in the US admit that the aid shipments are part of an effort to peel away Venezuela’s military from the embattled president.

Honking their horns as they passed a gauntlet of reporters, the trucks pulled up outside a warehouse where the aid will be stored until it can be delivered.

A handful of demonstrators gathered to welcome the aid trucks, waving placards and shouting “Maduro out”. One carried a sign reading: “The best humanitarian aid is to rid us of the cancer called Nicolás Maduro.”

The US senator Marco Rubio, who has played an active role in shaping Donald Trump’s Venezuela policy, tweeted on Thursday: “Over 50 metric tons of humanitarian aid from the US is now in Colombia. The Post-Maduro future of military leaders in #Venezuela will depend in large part on whether or not they allow that aid to reach the people.”

Over 50 metric tons of humanitarian aid from the U.S. is now in Colombia.

The Post-Maduro future of military leaders in #Venezuela will depend in large part on whether or not they allow that aid to reach the people of #Venezuela.

The United Nations estimates 3 million people have fled the country since 2015 to escape chronic food and medicine shortages, crumbling healthcare and transport systems and an economy in freefall.

Miguel Pizarro, an opposition lawmaker who is coordinating the aid operation, told the Guardian that blocking the bridge underlined just how desperately Venezuela needed an “orderly transition”.

The US has pledged $20m in aid to Venezuela, though analysts say that will do little to alleviate food shortages.

“Twenty million dollars barely scratches the surface of Venezuela’s needs,” said Adam Isacson, a security expert at the Washington Office on Latin America. “So this is mainly about optics. And it’s smart to try to weaken Venezuelan military loyalty to Maduro by putting the armed forces in a position where they’d have to obey a repulsive order: to block food and medicine. Whether he blocks it or lets it in, it’s a lose-lose for Maduro.”

Not welcome in Colombia, indigenous migrants stuck at border after fleeing Venezuela

In recent years, Cúcuta has come under growing pressure from the crisis next door: hundreds of thousands of Venezuelans have passed through the city, putting strain on the local government’s resources.

Now, the sweltering border city has become is the epicentre of a standoff pitting an international coalition of western democracies who back the self-declared interim president, Juan Guaidó, against Maduro and his backers in Russia, China, Cuba and Turkey.

Venezuelan opposition members gathered at the city’s Casino Internacional Hotel, have yet to determine how to take the aid shipments across. “That’s the million-dollar question,” one member said. “Hopefully we’ll figure it out soon because this is an inflection point in the history of our country.” 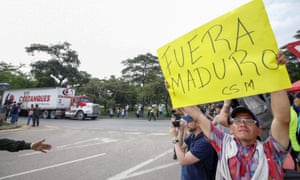 One Colombian official with knowledge of the talks – which are also taking place at a higher level between Washington, Bogotá and Guaidó’s team in Caracas – said that all options remain on the table. “They could even be flown in,” he said, adding that “it wouldn’t be a breach of Venezuelan sovereignty because Maduro is a tyrant and not the legitimate leader. Juan Guaidó is the country’s leader.”

On Thursday the foreign office minister, Alan Duncan, said that the UK was also preparing plans to help aid distribution. He added that the British government was seeking to choke funds that are used to pay the Venezuelan military salaries in a further attempt to undermine Maduro.

When Guaidó announced the aid deliveries during a speech in late January, he said Cúcuta would be just one point of delivery, alongside the Dutch Caribbean islands and Boa Vista, a border town in Brazil. No further announcement about those two points has been forthcoming.

Meanwhile, more Venezuelan refugees continue to sneak across the border into Colombia every day.

Marvín Ramírez had just crossed the river between the two countries, when he heard news of Maduro’s blockade.

“Maduro is a thief, he wants the aid for himself and his military too will take it and sell it for themselves,” Ramírez said, stepping into the shade to retreat from the punishing midday sun. “They should just keep it in Cúcuta to help all of us.”