Stephen Fry pronounces the death of classical liberalism: ‘We are irrelevant and outdated bystanders’

Politics is so toxic right now, why not just opt out completely? When Stephen Fry proposed this approach to Sydney’s packed Town Hall on Saturday night, he was greeted with a wave of sympathy. “A grand canyon has opened up in our world,” Fry said. On one side is the new right, promoting a bizarre

Politics is so toxic right now, why not just opt out completely? When Stephen Fry proposed this approach to Sydney’s packed Town Hall on Saturday night, he was greeted with a wave of sympathy.

“A grand canyon has opened up in our world,” Fry said. On one side is the new right, promoting a bizarre mixture of Christianity and libertarianism; on the other, the “illiberal liberals”, obsessed with identity politics and complaining about things like cultural appropriation. These tiny factions war above, while the rest of us watch, aghast, from the chasm below.

From MeToo to deforestation: Indonesian writers on their country’s biggest challenges

“Is this what is meant by the fine art of disagreement?” Fry asked. “A plague on both their houses.”

The actor, writer and comedian was giving the inaugural Hitch address at the Festival of Dangerous Ideas (FODI), named for his old friend, the late Christopher Hitchens: journalist, polemicist, controversialist, and the man who gave the opening keynote, titled Religion Poisons Everything, at the very first FODI in 2009.

Fry opened with an affectionate potted history of the divisive Hitchens’ life, career, and ideas. Hitchens’ direct, combative style was forged in the fire of Trotskyism, hard journalism and foreign correspondence; Fry, by contrast, characterised his own tendency to give opinions in a more “handwringing, cardigan-y kind of way”. What would Hitchens – whose support of George W Bush’s war on terror made him a political pariah to many of his old friends – have made of Trump, infinitely more careless, arguably stupider, who casts his Republican predecessor in such a flattering light that even the liberals who once parodied him are now afflicted by misguided nostalgia for the man? And how would he have interpreted the current political status quo? Now, more than ever, Fry said, we need Hitchens’ forthright perspective. 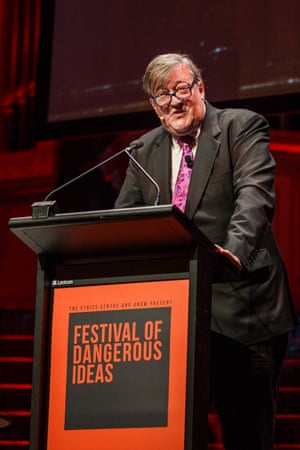 ‘Is this what is meant by the fine art of disagreement?’ Fry asked

There would have undoubtedly been those in the audience who baulked at the idea that what we really need in contemporary politics is more of Christopher Hitchens, but Fry wasn’t alone in his characterisation of the political moment. This year’s FODI was marked by an analysis of the division between a new kind of right and left locked in conflict that appears to have very little in common with what has come before, and by a general sense of foreboding about where that conflict might lead.

One might be forgiven for thinking that there’s nothing less dangerous in modern Australia than an arts festival, but it could have been otherwise. FODI split last year from its founding partner, the Sydney Opera House, and relocated to Cockatoo Island’s industrial precinct. The Opera House ran its own ideas festival, Antidote, in September, with a program that had a distinctly (implicit, if not explicit) progressive flavour. FODI, by contrast, is known for courting controversy, from Hitchens’ inaugural keynote to reports in July that the festival was trying to secure former head of Breitbart, former Trump advisor and one-time mentor to Milo Yiannopoulos, Steve Bannon, to speak. The program was eventually launched Bannon-free – perhaps to FODI’s benefit, given the (in this correspondent’s view, legitimate) criticisms of the ABC’s approach when giving the man a platform earlier this year.

Bannon aside, there’s always a certain amount of what feels like trolling in a program that is doing its best to be edgy. If one hadn’t had their fill of evangelical proto-capitalism listening to Scott “have a go to get a go” Morrison, one could, for instance, head along to hear a discussion between pundits like Nick Cater and Judith Sloan about the supposed benefits of economic inequality. Similarly, if one were not already aware of what headline magnet Germaine Greer thinks about anything, one could attend her festival panel, titled Too Dangerous, presumably to hear her speak about how she’s “too dangerous” to be allowed to speak at festivals. 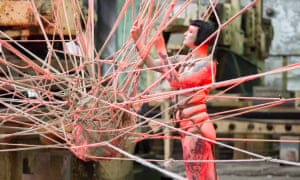 The talk-fest wasn’t the only thing on offer. Performance installations, such as Garth Knight’s full-nudity rope bondage “living sculpture” Submission, attracted crowds during every interval. Two performances of Betty Grumble’s anarchic and explicit Sex Clown Saves the World were scheduled for Sunday; and in the Sandstone Hall, twice a day, was a performance of the Royal Court Theatre’s Manwatching, an hour-long monologue written by an anonymous female playwright, consisting of a detailed, intimate account of the sexual history and proclivities of its author.

Perhaps the question we need to be asking is not ‘how do we get back to the middle?’ but ‘what is the right thing to do?’

Manwatching has rules: the performer must be a man, and the performer must not have seen the script before they perform it. The first performance I saw was by comedian Tommy Dean. His delivery was a mixture of deadpan and joshingly jaunty, yet he performed from the centre of the stage, barely moving from the music stand that held the paper he read from. The effect was competent but kind of one-note. The next day, Bachelor Australia franchise host Osher Günsberg picked up the script and gave it some dynamism, moving about the stage, giving the anecdotes some levels, genuinely breaking into laughter as he came across the gags, but also finding the deeper nuances and genuinely dark places within it. It is the kind of production that benefits from multiple viewings, as, much like Nat Randall’s endurance piece The Second Woman, different men bring different interpretations to the gendered material with which they’re confronted. 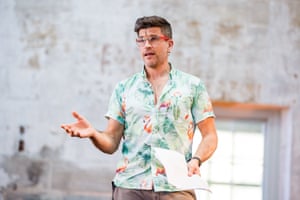 While it’s never quite clear what the primary outcome of these festivals is supposed to be, they do tend to serve as something of a barometer for the preoccupations of the literary class. The conversations over the weekend exposed a genuine frustration with the lack of nuance in popular debate. Cracks about the “musical chairs” (Fry) or “revolving door” (Tim Soutphommasane) of parliament aside, the Australian government seems to be little more than a sideshow to what is happening overseas – in the United States, in Europe, and increasingly, in Brazil. Does Trump represent fascism or populism? Do the opportunities presented by the mass collection of data by corporations and governments outweigh its potential to be used against the interests of the public? How are we to understand the collision between politics and social media that seems to characterise this decade?

If one idea emerged above all others, though, it was the conviction that classical liberalism is dead. Its proponents used to set the agenda, said Fry in his keynote, because they controlled the flow of ideas. Now: “we are irrelevant and outdated bystanders.” On Sunday morning, in the giant, echoing Turbine Hall, British historian Niall Ferguson argued that social democracy is crumbling, that the political future will be one rent by different kinds of division: there will be no return to what we currently perceive as “the middle ground”. Why do we so instinctively lament the loss of a “middle ground” though, I found myself thinking? Surely there’s no inherent moral value in halfway for its own sake? Perhaps the question we need to be asking is not “how do we get back to the middle?” but “what is the right thing to do?”

Fry’s solution to this new face of politics was, ultimately, for all of us to be kind to one another. While he presumably meant well, it felt more than a little pat given he’d just expounded on the great existential threats of our time, including the approaching technological tidal wave and its far more literal companion in rising sea levels, a destructively warming planet, and our leaders’ complete inertia in the face of such threats. Earlier that day, by contrast, writer Angela Nagle had approached the topic of the political status quo from the perspective of her research into the online subcultures that became the alt-right and their radical liberal equivalents. A self-described left-winger of the Bennite labour tradition, Nagle suggested a clearer program would be for the left to reclaim their traditional mission of fighting for the material interests of the ordinary person, else we be prepared for a political future that encapsulates the worst of both contemporary left and right.

Permeating the discourse throughout the weekend was a sense that we’re approaching a time of crisis. On Sunday afternoon, Pankaj Mishra argued that one of the problems with throwing around words like “fascism” to describe what’s happening in capitalist democracies today is that it prevents us from seeing what’s new about contemporary political currents. It seemed a prescient warning: that what is coming will not be the same as what has passed, but only a genuine dialogue with history coupled with a clear-eyed look at the present can help us forge a new path forward.